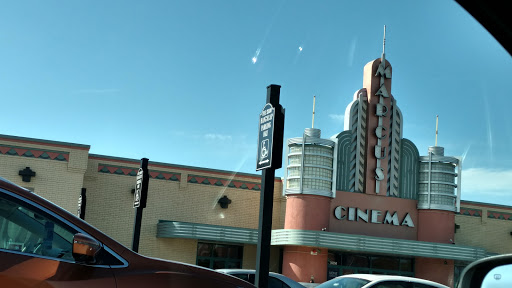 This theatre is garbage. You can reserve your seats ahead of time, and if youre planning to go here, you should probably do so. Otherwise you arent likely to get good seats. I dont mean just order tickets ahead of time, you actually get to pick your seat, which I guess is a nice option if you plan ahead, but not worth the effort for a theatre like this. The customer service is trash, the food is overpriced and just not good, plus the parking sucks. This is the kind of theatre I used to think of as a "walk-in and watch" theatre, which was great. Now it is no longer that. If you want to reserve actual nice seats, and actually get an all around good experience including great food and drinks, check out Hollywood Blvd or iPic theaters, if you want to just show up, pick your own seats, and watch a movie, go to AMC. Theres really no good reason to go to Marcus unless its a last resort, in which case you should definitely pre-order your tickets.... This is just my experience and opinion of course, feel free to try it for yourself, just make sure to get your tickets far in advance if you want even remotely good seats.

While we were watching a movie, the power went out. The way that the situation was handled was horrible. The power came back on, but we were informed that the movie would not be turning on again for this showing, and needed to leave. We were handed a single voucher, to come back and watch the same movie all over again. As we were leaving, people were buying tickets to attend the next showing of the movie we were never able to finish. Marcus Theaters needed to keep their sales numbers up for the next showings, but did not care about the customers that had already purchased tickets. It would have been better if they kept playing the movie once the power was restored, or at least given an additional voucher. Its clear that they dont actually care about the customers, but care about their sales numbers. I also called customer service to ask why an additional voucher wasnt issued (as I live a half hour away and have to drive in to use my voucher on watching the same movie), and left 4 nice messages, asking for them to please call me, and I never got a call from them. Terrible customer service, and selfish company.

Im upset to be writing a bad review but after yesterdays experience Im extremely disappointed that we were unable to watch the Lego Batman movie. We walked into the theater and bought our tickets around 4:30. We bought our snacks and popcorn and went to go sit down in our assigned seats. The movie was supposed to start at 4:45. After 15 minutes of waiting with antsy children, the manager said he was working on getting the film up and running. Then after another 15 minutes they came back and had told us they arent able to run the movie and they will be giving out free passes. Im not complaining that they gave our free passes because we bought our tickets and it was only fair for us to receive refunds. But what about the wasted time, disappointed children, and money wasted on popcorn and snacks. The only time I will come back here is to use my movie passes but after that I will be going to a different local theater. Hope Marcus Theaters can troubleshoot their problems before selling tickets to a show that isnt working instead of customers having to deal with what we dealt with yesterday.

This used to be my favorite theater. It was always clean, the staff was polite and items at the concession stand, although overpriced, were good. In the last year, the customer service has gone down, especially in the concession area. The people that work there dont smile, they are sarcastic and extremely rude. The drink dispensers were not working properly and the concession guy just rolled his eyes at us and walked away from my husband without uttering a word. He didnt even go check the machines. Everything was coming out clear and ice was piled up in all the trays of the machines. When we finally were able to get Pepsi, it was flat and they wouldnt refund our money yesterday. The ladies bathroom has been a pig sty lately. The reserved seating is a joke because people still come in and take whatever seat they want. Three times we had people in our seats, one of them refused to move until we said we would contact a staff member. Its incredibly disappointing. The fun is gone from the movie theater experience.

We came in to see Ghostbusters at 7:30. We had pre-ordered tickets online. We had them printed out at the front desk. They had entirely different seats on them than the ones we had purchased online. We sat in the seats we paid for online. 5 minites into the movie a manager, Rob, came to us because someone else had them printed out and was looking for their spot. We tried telling the manager what happened and ahowed him the proof of purchase on the phone, and he told us to get out because we were disturbing the movie for everyone else. All of this would not have been as bad if there werent TWO security guards with LIVE GUNS escorting us out of the show. They offered us a refund and free tickets. Like were going to come back. Unacceptable, balancing on the line of illegal, behavior on part of the staff. Im never going back to a place that treated me like a criminal in need of an armed escort when it was them who made the mistake. Go spend your money somewhere else.

This is a really solid theater, one that has been actively adding to the experience for a long time now. The place has a parking garage, a themed entrance with an evolving menu, self-service drinking fountain, and even reclining chairs. The theaters are big and youre in for a treat with the ultra screen. With that being said there are 2 things that make me avoid this theater most of the time... Its always crowded, and they began doing assigned seating a year or so ago. That means if you want to see a new film you better buy your tickets when they go on sale or at the very least in-advance. If you go to the cinema and buy your ticket right before the movie starts then theres a good chance youll end up with a bad seat. Pros: Food, clean, constantly evolving/renovating theaters, comfy chairs, and overall good experience. Cons: Crowded, and assigned seating with large crowds means this is a no go for new premiers.

In February, I was going here to watch Rings with my friends and I. It was 10 minutes until our movie started, so my friend said that we can get something at the food stand place. We all ordered a milkshake and 10 minutes later, both of my friends milkshakes came, but not mine. I asked if mine is almost ready, but they didnt even make mine at all! They were making the others food that ordered after me. 20 minutes later, they gave me my milkshake and we were 20 minutes late to the movie. I cant believe they prepared food for the people after me. So disappointed. Ive seen ice cream places that were busier than Marcus Theaters and they make it 3 times faster and tastier. Also, when I was watching a movie yesterday, I saw a white mouse running in the theaters and it went behind the seats. The theater must be so dirty, because theres a mouse and I stepped on something sticky.