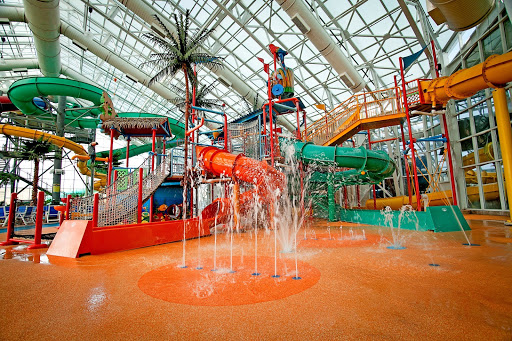 This park was the only "pool" option available when staying at our hotel, the Home2Suites in Rapid City. We ended up purchasing an $80 "family" package that allowed all 5 of us to use the water park, essentially making the cost $16/person. On the plus side, the lines for the slides moved rather quickly. Also, the water and air temperature were pleasantly warm. Additionally, food and drinks are readily available from the bar/restaurant attached to the water park (though one pays more for that convenience, of course); we brought our own water bottles in, and nobody seemed to care. The kids really enjoyed the slides and the "lilly pad" climbing/crossing area! Negatives: Safety...the lifeguard-to-area ratio is terrible compared to other water parks that weve been to. There are AT LEAST 6 areas that need supervision (hot tub, lazy river, top of slides, bottom of slides, "lilly pad" area, and climbing structure). We only saw 3 lifeguards to cover all those areas, and one of them was busy repairing fence netting. The lifeguard at the top of the slide did not correct anybody who was breaking the clearly-posted rules (sliding head-first, backwards, facing each other on tubes instead of the same direction). People are allowed to swim in the lazy river without tubes, and we saw kids swimming UNDER other people who were in tubes, trying to go upstream, etc. Finally, you can slide with a child on your lap; while this is fun for younger kids, weve never seen this permitted at other water parks. Value...for a regular price entry of $25.99, there isnt enough variety for age and "thrill" preferences. The 3 big slides are really only for thrill-seekers. The climbing structure slides are geared for 4- to 8-year-olds; there are no small slides or pools for toddlers or preschoolers. There are also no "medium" slides for more timid kids or adults who might want to slide without that "roller-coaster" feeling. Finally, the park CHARGES people a "spectator" fee even if they dont want to swim! Bottom line: fun for one afternoon IF you have a discount, good adult-child ratio in your party, and watch your own kids vigilantly.

I was at the Watiki water park July 5th, 2013, staying with relatives and not as a guest at the hotel. I have been there several times before; this was my worst experience and might be just because it was a holiday weekend. (Though, that is no excuse.) During the week, their summer hours are much earlier than what is on the web of 4-9PM. So, call and find out what they really are. The chlorine is rather strong. I am glad I did not wear anything too new (or for that matter - too old). It was very hard on our swimsuits. The rides are relatively mellow and my kid(7) who swims decent loved them all. Especially the new kiddie slide with the clear section that runs through the bar. I did not think there were enough lifeguards. There was a new lifeguard on top of the pools who did not seem to understand the rules. He would actually grab the top of the slide, swing and push people to make them faster. Though that might make you want to come - I dont think it will be continued. Timing was off at first and people did run into each other. I saw no lifeguard stationed at the childrens area or between the hot tub and lazy river. People would hold on to their tubes run after each run - so if they were short on tubes - it could be difficult to get one. Other parks make you sacrifice your tube and wait to get a new one. But, once you got one - you get to hold on to it. Also, the lazy river was being treated more like a swimming pool - tubes optional. It wasnt like that before. Though I have stayed at La Quinta before and the service was decent. There was no meeting area for multiple rooms of people to just sit and play cards; the Marriot next door allows you to use their breakfast area for that and it works great. The Marriot is more expensive though the hotel rates get really hiked up at both hotels the fewer rooms they have. (a lot)

As a guest at one of the attached hotels, I decided to let the kids go down and spend some time in the water park. Price was reasonable and the kids really had a great time, so from that standpoint, its a great place. My issue here is from the business dealings point of view. The young kids at the counter have a completely lackadaisical attitude and the customer seems to be a distraction rather than the reason for their employment. To give a specific example - I paid one the kids using my debit card for a 22oz cup of soda, which was $2.49. The guy gives me my receipt, then informs me that that the soda fountain machine isnt working right now. He tells me he cant give me a refund, another young lady behind the counter confirms that statement, then he tells me he can give me a can of soda. My response to this was - "For $2.49?? Yeah, Ill bet you would." He looks at me confused and then eventually says "Oh? Oh yeah, thats kinda expensive, huh?" Ya think?!?! The girl comes back and says that her boss is working on it and he should have it working in about 5 or 10 minutes so would just have to wait. Nice. Obviously, this place isnt necessarily required to be geared toward service, but at least give it some effort. Its really not that hard to greet someone and use some common courtesy along with common sense. Another small concern of mine was the lifeguards that were there wearing "regular" clothes with fully-laced sneakers on their feet. Im sure they can still do their job in that attire, but wouldnt it make sense to be in some sort of standard lifeguard attire? I would think that pants and sneakers would be less than conducive to handling lifeguard emergencies, should the need arise. Just an observation and probably an opinion more than a fact, but interesting to me nonetheless.

While the lazy river, the water-slides, and kids play-structures were great, there were some serious issues. As we didnt stay at the hotel, we had to enter through the arcade....which meant we first needed to climb a bunch of stairs and then back back down....really bizarre. Also, there were no decent change rooms. There was one co-ed change room with maybe 10 stalls for families (crazy since the pool area is rated as over 600 people capacity). Both the change room (singular) and the bathrooms STUNK of urine. Seemed quite crowded (especially as it was an off-season weekend). I cant imagine how crowded it is during the summer. Finally, the lifeguards seemed quite indifferent if pool rules were followed or not. For example, one of the slides has a warning sign stating that double tubes are not allowed but the lifeguard has not problem allowing double-tubes.

This was a two night stop sandwiched in between a couple days of camping at badlands and a few in custer state park. It is the ideal place for a family with small kids. It is really close to 79, 16 and 90 highways. Lots of food and attractions nearby. Food at the hotel is bar food, not healthy but edible. The water park and the rooms were clean and well maintained. Breakfast in the am is free and adequate though the eggs were instant. You can have cereal or waffles like any other Hampton Fairfield or La Quinta. Wifi is free as well. Mom and dad can have a cocltail and relax while kids play. 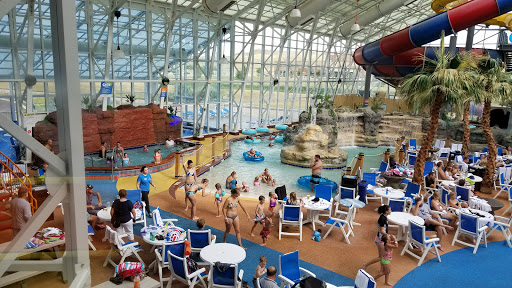 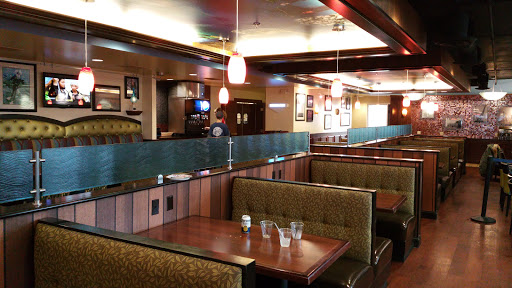 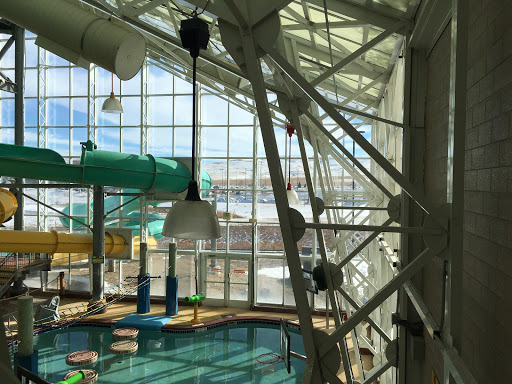 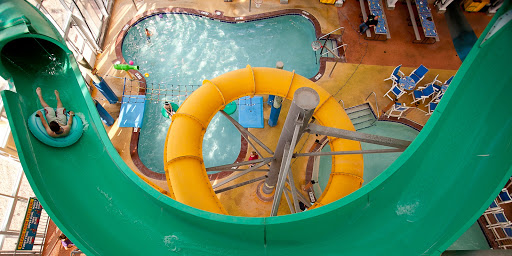 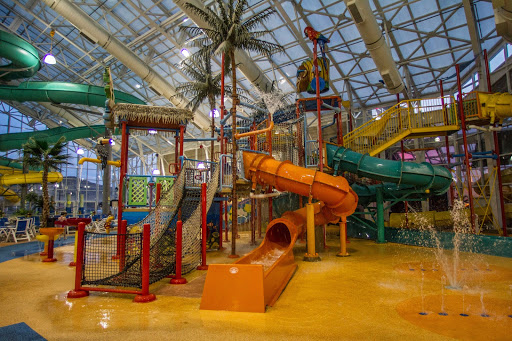 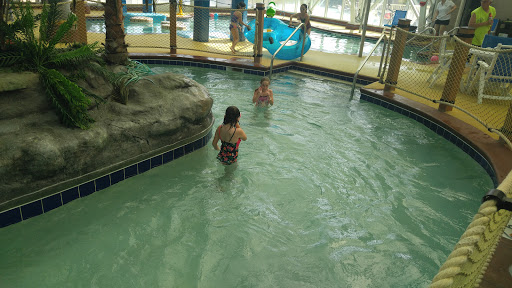 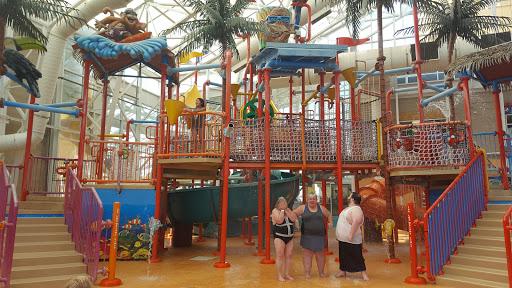 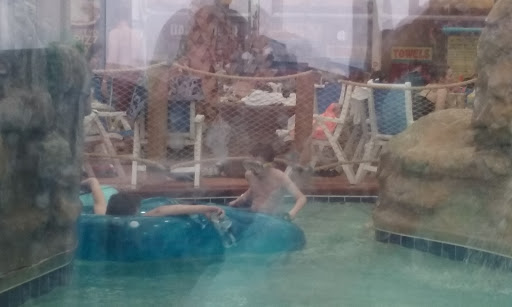 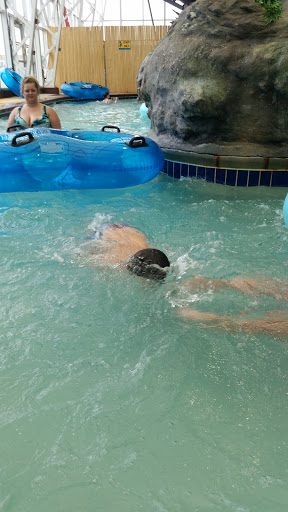 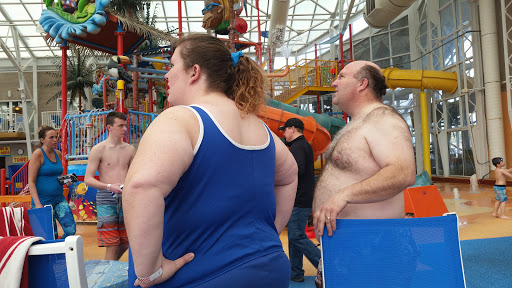 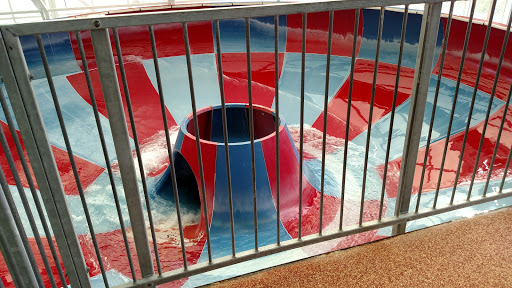 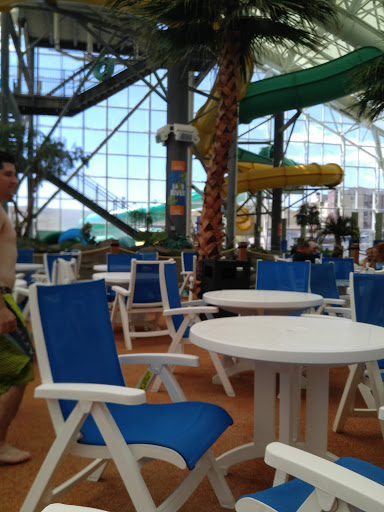 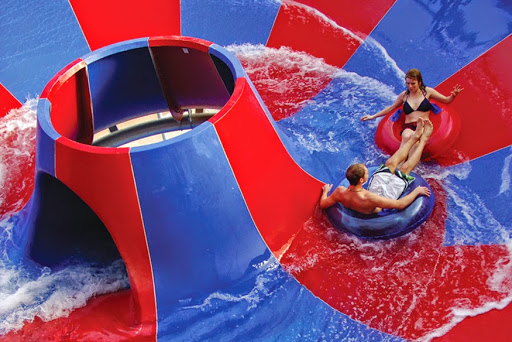 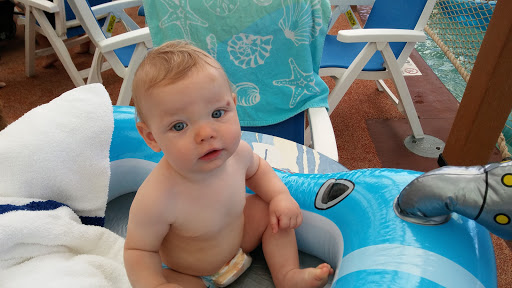 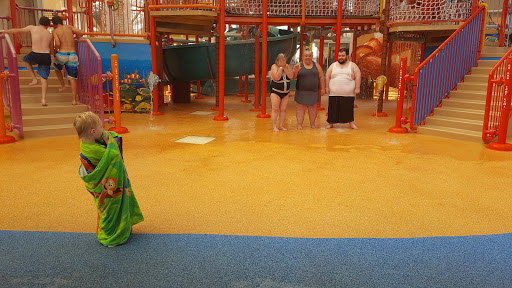 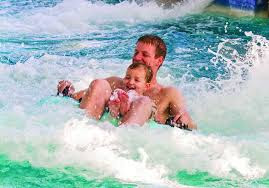