Well first let me say i went to the Florida Aquarium in Tampa and that is the only aquarium i have to compare this too. We went the other day took our 2 yr old and 7 yr old. I saw the reviews and almost didnt go but my daughter (7) really wanted to go since i had already mentioned it. So we got tickets online and it was over spring break so i expected it to be busy. Thank goodness we did buy tickets in advance because the line to get in for general admission had to be an hour wait. We waited about 15 minutes. I really expected allot more then we saw. I kept looking for more and then boom we are at the end and im thinking did i miss a part of it? The tunnel where you go under the big tank was tiny and didnt even come maybe half way down on either side. It was maybe 10 ft long if that. Sea world had a much longer tunnel and so did florida. I mean i thought after reading all the good reviews that i was missing something. The sharks were not big at all and i dont know what happened to the octopus but he was not there. There were a couple tanks under repair as well that we missed out on. The new Claws area was really empty just a few tanks the only thing cool was the huge Japanese spider crab but the rest of it was underwhelming to say the least. we took our time and still made it out in under an hour. The layout really bugs me too because most areas are narrow and they funnel you through and around a path so you cant stray you have to go a certain way. And the problem is it was not even that crowded when we went and it was still hard to get around some of the areas if people did not want to move. Now i realize we are in the middle of the US and no ocean for many many miles. However this doesnt stop Omaha zoo with their aquarium and the Denver Aquarium either one which are from what i can see online and read much bigger and much better then this. The other thing is there is 1 restroom and its in the middle by the petting area. So if you have to go your out of luck till then. Would i go again? No. It was not worth $45. Now if it were say $20 for a family of 3 then ok yea its worth that. But for the same price i can get into Omaha zoo i mean sea life im sorry but its just not worth it. I hate being so negative i usually try to find the middle ground but there just was no middle ground here. Its the smallest aquarium i have ever seen. Most of the tanks are not that big they are like a large home tank. There are a few big ones but nothing to write home about. My 7 yr old thought it was cool but didnt express any interest in going back. She was disapointed at the tunnel for sure because i had assumed it was bigger based upon feedback and i told her about the one we went in at the florida aquarium and i know its not the biggest by far. Save your money take a trip to omaha or to Denver. Or to Wichita for the zoo there. I grew up in sedgwick county and the zoo has just grown so much and granted i hear its not as good as the omaha zoo its much better then the KC zoo.

Honestly, Id give this about 2.5 stars... I think the tickets are overpriced for the attraction. It is quite interesting--well, I think it would be. Unfortunately, my family and I attended on the weekend, so there were so many people there it was actually physically impossible to get close enough to see many of the exhibits. My husband was fearful of this, but I assured him the management obviously took great strides to avoid this by offering advance-purchase tickets, and warnings of tickets selling out weeks in advance. How wrong I was.... The time it takes to go through it depends on two things, in my opinion: 1) how interesting you find fish, and thus how much time you spend at each display. We could have spent a lot more time at many of them, but again, the number of people prevented us from doing so. 2) The mob of people forcing you through regardless of your wishes... The advance tickets might be worthwhile at the beginning of the day, but it didnt really make sense for our trip. We were scheduled for a 1-2 slot on a Saturday (big mistake!). We noticed the line was long--even the advanced ticket line, so we got in line at about 20 after 12. The line moved quite quickly, and we were to the front by 12:38. Eureka! Meanwhile...A poor family just in front of us accidentally got in the wrong line, and had to go to the back of the general admission line...man, Id sure hate to be those folks... So, we get to the front, and since our time is 1-2, we cant actually enter until exactly 1 pm. Ok, so this is a little frustrating, but I understand. We signed up for a specific time, they have to stick to it. So we stand and prepare to wait 22 minutes (oh, shucks, make that 27 minutes, LegoLand time is 5 minutes behind "real" time, and the aquarium is on Lego Land time). Waiting, waiting...waiting...waiting....and we look over....and ARE YOU KIDDING ME??? The poor schmucks who got put to the back of the general admission line are now at the FRONT of the general admission line...now, Im happy they didnt wait the FOUR HOURS that the signs warned they would have to wait, but SERIOUSLY!!! They waited LESS time than we did????? We would have been better off without the advance tickets...and maybe spending the day at the hotel pool.

I visited the KC SeaLife Aquarium Friday June 8 with a group of people from rural SW Missouri. I, personally, have traveled extensively and have visited many many zoos and aquariums; so my impressions were quite different from those with less experience. I think in general we all really enjoyed ourselves, although it was quite crowded. I had called ahead to get information, and learned that our group of 11 wasnt big enough to qualify for any group discounts, but I was told that since several of us are either disabled or a "Senior" (or both), I should contact a staff person so we didnt have to wait long. After being dropped off at the closest point (a VERY long block away, due to Grand Ave being blocked off for some sort of flea/antique market), and assisting group members to the entrance, I did just that. The employee I spoke with first told us to "go stand in the shade and we will get you in right after these kids" (a group from the YMCA) No seating was available outside anywhere close. We waited (it was VERY warm!) for about 20 minutes and when I again questioned an employee, we were told "OH, he told you guys wrong, you need to go and get in line" (a VERY long line, which had cycled through at least once during our wait). So then we had to take another long walk in the heat and crowds to the end of the "maze" to reach the back of the line. Once inside, it was quite crowded, I saw only one employee (she was in the "playground" towards the end of the tour) outside of an exhibit, and the kids working the touch pool etc seemed to mostly be concerned with flirting with each other or teen customers! There is NO clear parking area, no handicapped accessibility or accomodations outside of the building. NO signage at all to clarify where to go/what to do etc. I enjoyed the day only because of the sweet people I was with, and because I miss my beach home in Oregon!! The cost compares to the entrance fee to wonderful exhibits such as the Oregon Coast Aquarium, the Aquarium of the Pacific and Monterey Bay... but the organization of employees, and the quality of the animals/displays certainly does NOT compare favorably. 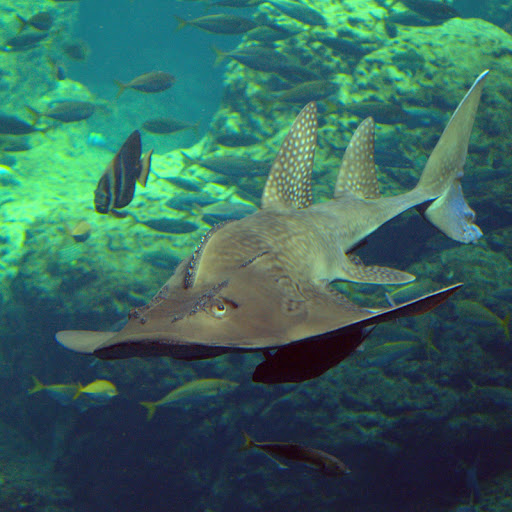 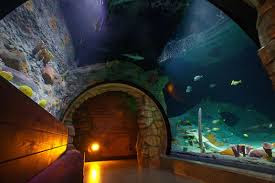 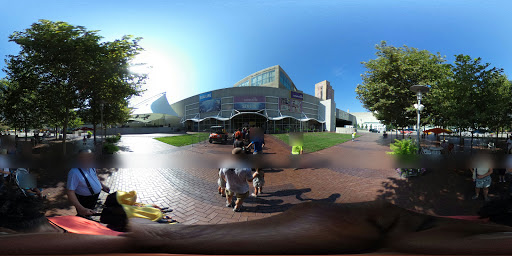 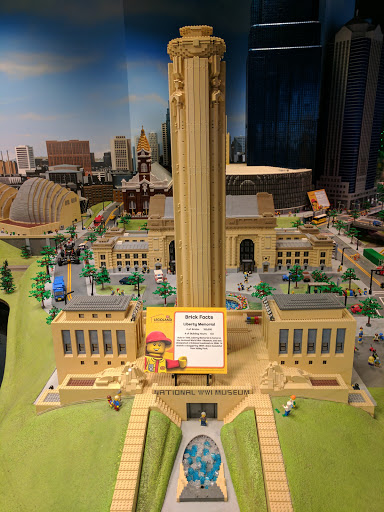 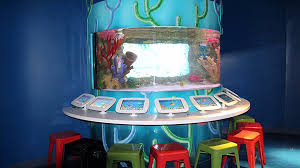 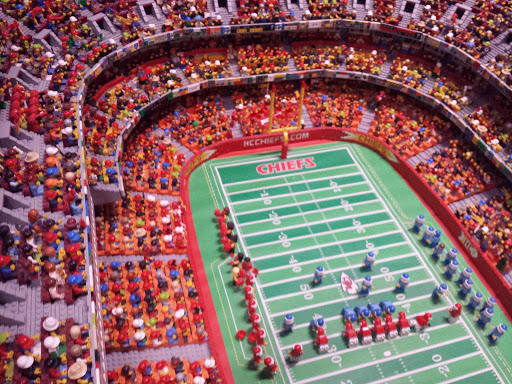 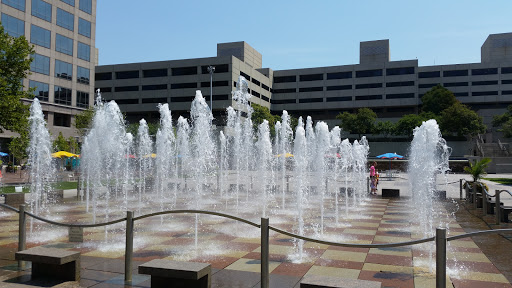 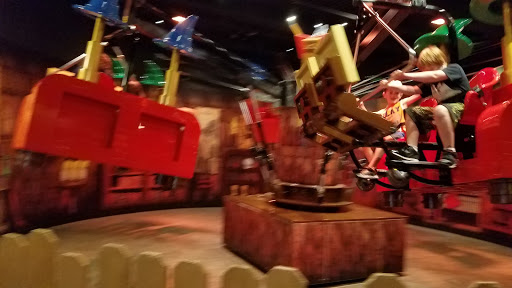 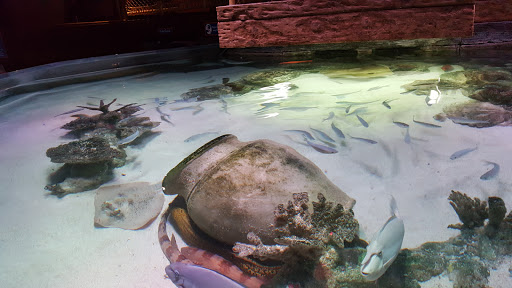 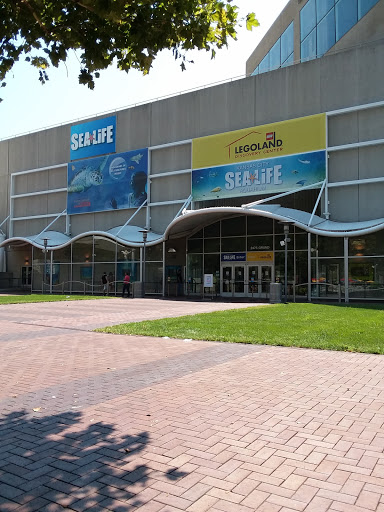 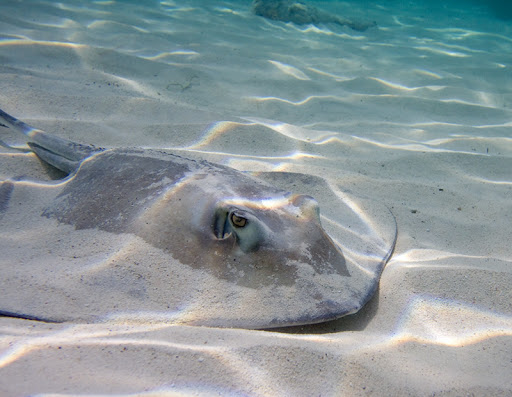 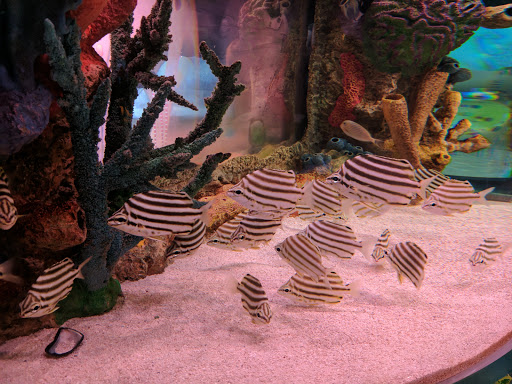 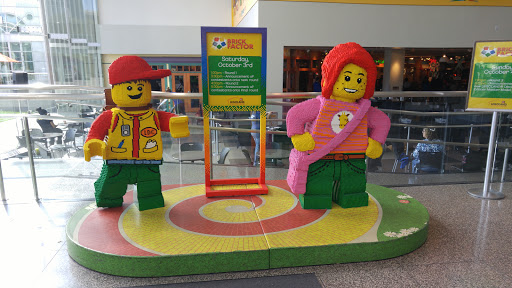 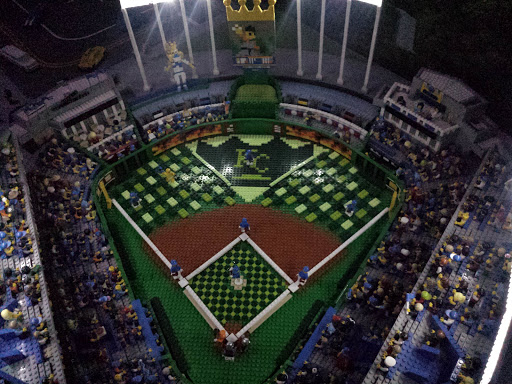 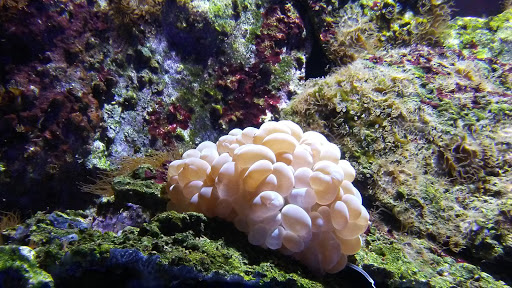 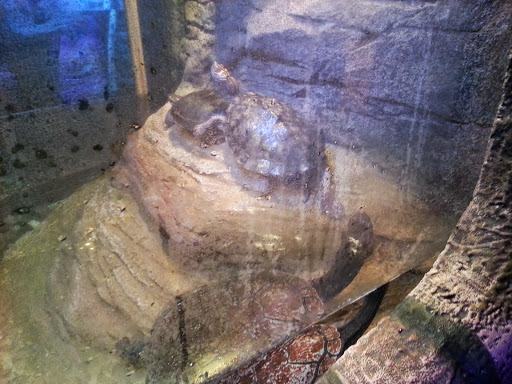 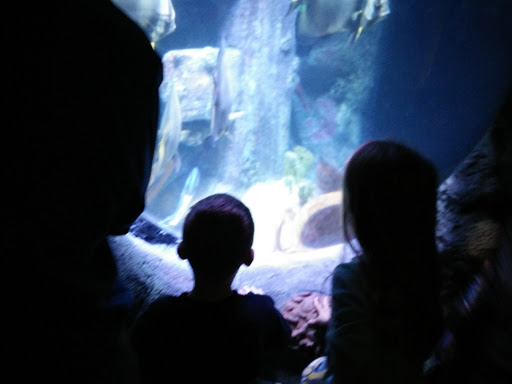 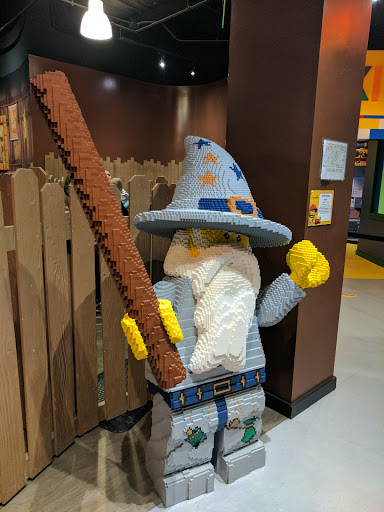 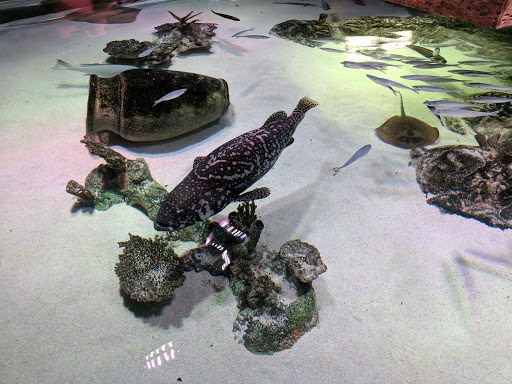