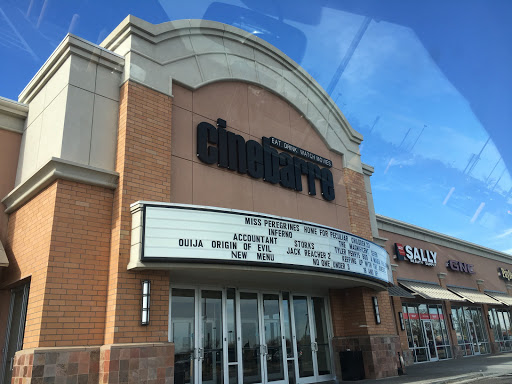 Let me preface this with the fact that I handle mediocrity with a smile. I can handle bad service, so-so food and drinks, and common mistakes and still have an excellent time. With that said, my last visit to Cinebarre Thornton was far and away the worst moviegoing experience Ive ever had (and I was seeing the horror flick Stay Alive back in the day when a tornado touched down by the theater). To kick it off, the movie started late. We originally thought "hey, no big deal" because the waitress took our orders around the time the film was supposed to start. We supposed wed just eat, drink, and be merry as we waited. Well, what a wait it was. Nearly 50 minutes to be precise. But fear not, we were able to nibble on lukewarm mozzarella sticks and stale marinara as we waited. Then came the "chips and salsa" which we added cheese sauce to. The chips were cold and there was no salsa to speak of, simply a small ramican of the worlds saddest, most congealed cheese sauce that was maybe warm in a previous life but was now hovering just slightly above "chilled." Whatever, we think. We will just ask for that to be removed. Around 50 minutes into the wait, the film finally starts. The drinks come shortly thereafter (also tasted like garbage and came in solo cups since they were "out of glasses") and we ask just to remove them and the chips from the bill. The waitress says she will comp it all and I decide to try and make the best of it. Like I said, Im pretty patient. A little over halfway into the film (mother! If I didnt state earlier) the waitress comes in and says that the manager didnt agree to comping anything and we would have to pay. We rebut with the fact that we wouldve gladly sent food and drink back had she not offered it for free. She then goes and promptly gets this taken care of, props to her. However, the final straw was during the climax of the film. I wont spoil anything, but the climax in mother! looks to be pretty important. Unfortunately, as we all anticipated getting some answers to the films mysteries, the lights came on and the sound cut out. About 6 of us were so fed up that we immediately left the theater in frustration. When we attempted to speak to the 2 managers on duty about the quality of service that we had received, one pretended that he wasnt in charge (We later learned he was a GM looking for someone else to handle the mistakes) and the other hid in the upstairs office and refused to come speak to us. The man who pretended he had no managerial authority quickly followed suit. My husband and I have been going to Cinebarre Thornton for quite a while. The waitress recognized us and had served us before (again, I stress she did nothing wrong and was simply caught in a very painfully uncomfortable situation) so we definitely spend plenty of time here. This is unfortunately going to be our final visit. Like I said, mediocrity I can handle, no problem. This was something else. Im going to comfort myself by saying I was hopefully on a revival of MTVs Boiling Points because if this wasnt a psychological experiment, I dont know how to justify such an atrocious experience. Ill be contacting corporate as soon as possible.

If I could give zero stars I would. This was my first experience with Cinebarre and we were excited to go. It was a rainy cold day and we were looking for a fun new place to take the kids. Unfortunately our excitement quickly turned to frustration and anger. We should have know from when we walked into the establishment and we were greeted by a snotty teenager arguing with a customer and refusing to refund an extra ticket she has literally just purchased. From there we had stood at the bar waiting for someone to help us and we were continually ignored. With only about 10 minutes until our movie started we finally flagged down an employee to get us our tickets. We got to our theater just in time for the tail end of the previews and we realized that the employee forgot to give us our 3D glasses. I went back out to the lobby to retrieve glasses and I was told that there were only childrens glasses and someone was getting adult glasses. After standing in the lobby once again for about 10 minutes and employees arguing about whos job it was to get the glasses and a manger saying "I dont know what you want me to do about it." I finally asked for all childrens glasses so that we didnt miss anymore of the movie. I get back in time to give my kids and sister their glasses and finish ordering our dinner. We watched about 20 minutes of the movie and my daughter and my food arrived. It all tasted terrible and basically like frozen food despite the high prices, but we were starving and ate anyway. After about another 45 minutes my son taps my shoulder and asks where his food was. Since it was dark I never realized he and my sister never got their food! Just as we are flagging down an employee they magically show up with the rest of the order which was obviously forgotten. They said that they would give us a discount for the trouble. We get our checks to find that they never did give us a discount. So we once again flag down the employee and question her. She says she will get a manager and stomps away huffing and puffing. Up to this point we were very nice and forgiving but weve had enough. The manager comes over and states that they cant give us a discount on the food because some of it was eaten and we should have come talk to them earlier. So they wanted us to leave and miss the movie and go discuss the situation they caused! No way, we demanded that we only pay for half the meal and we would be satisfied since my son had to wait so long and never ate his burgers because they tasted so bad. They instead offered comp tickets for another visit. We stated that there would be no way we would return to the establishment and they finally decided to give us the proper discount. We left as they continued with their rude attitude and comments. A word of advise save yourself the hassle and bad family experience and go someplace with good food and customer service because you certainly will not find it here!!!

Perhaps I should have read recent reviews of Cinebarre Thornton prior to visiting again but rest assured, this will be the last visit for me. We have visited once prior. Our experience was less than bad before. The food was late and was cold. The chicken wings were literally the worst I have tasted ever. Overpriced and rubbish. To complete the visit, fifteen minutes before the end of the movie, just as the plot was to be revealed, the projector crashed. We waited half an hour for it to be fixed, then we were forced to watch twenty minutes of the movie that we had already seen, only to have it crash in the same place. We left and were given a free movie voucher as a consulation prize. Fast forward to last night. We attempted to redeem our movie vouchers, ready to give cinnabar another chance. We were greeted to a line of 30 people waiting in line with only one staff serving. Not would you would expect at 7pm on Saturday evening. Disappointing but not the end of the world. We got a drink and got our seats. We filled in our order sheet and waited patiently for an attendant to come and get it. A full half hour later, someone eventually arrived and took our order. I was looking forward to the two entrees and an appetizer for 22 dollars. Sadly, the deal was so good that it never came, ever. No food or drinks were provided to us and no attendant ever returned. In summary then.. First experience and Cinnabarre Thornton, the food was rancid and the movie projector crashed. Second, the service was so lousy that our food didnt show up, at all. This location should have its managerial staff fired immediately.