Terrible management. Situation: I took a couple of my kids from Sunday school here to try and treat them to a nice time bowling. The lane was broken. Both the gutter and pins knocked down would not register, causing us to repeatedly throw the ball until something happened. I went and told the guy at the counter. He said "okay, let me fix it." I go back and the same thing happens again. At this point my kids, who were trying to be fun and keep score to make a competition, were frustrated and one of them told another person who was the manager. He came to our lane, and asked if there were problems and I said yes, then he said "Okay i will fix it." Goes away, and we sit there. Nothing from the screen, the lane lights, or the staff indicated anything happened, so my kids proceeded to bowl. After the problem CONTINUED, I had enough and tried to find someone again. I went to the front desk, and repeatedly no one was there. Me and my kids were pretty frustrated. In the hour we paid for, we couldve played 2 games. We tried to be good sports about it and still have fun, but in the end it was a waste of time. How it was handled: Finally I found the guy who originally was at the counter, coming out from the back. I told him again that there was still a problem. He said theres nothing he could do, that if I came to him earlier he wouldve moved us to another lane. First I just take that and go back to the lane. But once the game was over and we were getting ready to leave, I felt surely something could be done to help us out. Even just a small discount would suffice. I talk to the guy again at the counter, and again he says theres nothing he could do. This is where things get really bad. The manager then comes up and starts arguing with me about how he tried to fix it but we kept on bowling and how we shouldve stopped. But he didnt say to stop. Nothing on the screen said stop. The lane lights didnt turn off. All he couldve down is say, "Okay I will attempt to fix it, p;lease dont bowl until I say so." He never even came back to the lane to tell us he is trying to fix it and we should stop. He just proceeded to let us play in the broken lane. SO he keeps arguing with me and until I say how in the hour we played we COULDVE played 2 games but we only got to play one because one frame would take 10 minutes. He then asks "Would you like to pay the 1 game rate instead of the hourly?" At this moment, I thought he was cutting me some slack and giving me some cheaper rate. He did not disclose that its actually MORE EXPENSIVE. So Im a customer who had a terrible experience and they CHARGED ME MORE. After running my card and giving my receipt I realize Ive been duped. I kept composed and told the guy at the counter, "Hey man, this isnt cool, I thought he was giving me a break, but he never said it was more...." Who treats their customers like this? Honestly, the manager there Sunday, 8/15 needs to be retrained. I work in customer service, and you dont argue with the customer for 30 minutes after CHARGING more to then finally comp the whole thing. BTW, they didnt refund my card. Just gave me a receipt that said $0 to get me out of there. I wanted to like this business, but the way that manager and counter / service guy treated their customer was absolutely immature, backward, and repulsive.

Been here many times and 99 percent of the time the service sucks. They have a Great DJ and thats it. Horrible bartenders and food. Filthy bathrooms. You must make a serious effort to flag down a bartender to get a drink even when the place isnt that busy. Tonight my wife and I sit at the bar and were never approached despite attempts to get their attention. Curiously the white bartender guy waited on single women and men who walked up after us while we waited and waited. He walked past us numerous times and replaced cocktail glasses and such without any regard for our hand waving and stares. You can sit at the bar with no drink or service indefinitely. I almost thought of experimenting with the time it would take. Nobody will ask you what you need. The black guy working behind the bar just flat out ignored everything You can holler at some and they just ignore you. If youre an attractive female with cleavage perhaps you may get quicker service or more frustrating, we seen 3 other parries arrive at the bar after us and leave with drinks before us. This has been standard service for years yet I gave them another opportunity tonight, WHY?! . The second set of drinks we ordered the white guy bartender literally tossed the credit card and receipt holder along with the pen that rolled across the bar. RUDE!! The only reason this place keeps going is good DJ, meat market, Bowling for the kids, pool tables and its the only place in the Eastlake area of its kind. This place needs serious improvement on service. Zero tip for the bartenders! If you dont like your job or give 2 cents about customer service youre in the wrong business.

Setup as a premium bowling experience for adults it does not meet this expectation. Located amongst popular birthday party destinations this bowling alley will be filled with loud kids despite its attempts at drawing in an older crowd with a full bar and food service. The alley charges by the hour and will have no problem turning your lane off at the end of your time even if you are in the 10th frame and working off your 4th strike (happened to us). You end up paying a premium for the experience which in many ways does not exceed what a regular bowling alley can provide. The lanes are not well maintained or monitored. The large groups of kids I saw were pretty harsh on the lanes throwing multiple balls into lane simultaneously and often making contact with the pin rack equipment. Their ball returns also leave deposits on your ball which I guess if you dont bring your own is likely not a big deal to you. Going during the week after work would likely alleviate the crowd of kids and happy hour specials make the price of attending reasonable. Any other time, especially weekends, I would highly advise avoiding and going elsewhere.

As a former employee i am well aware of the quality of the food.. EXCELLENT. Sometimes it might take a awhile to roll out on busy nights (5 guyz max cooking for 400ppl?!) but when it does its always on point. The bar is by far the biggest in town and serves basically everything but blended drinks.. They have no cover for fight nights and even a karaoke night.. Used to have awesome weekends when DJ Billie Knight was still on payroll but due to a string of violence and even one murder they decided to re-gear the place for the 30&up crowd during the weekend by playing classic rock and ipod selections rather than live spun hiphop. The one thing i would be weary of is cleanliness on the bowling balls as they are hardly ever cleaned but always touched and to avoid the place during winter/cold/flu season.. The management team is stingy with giving days off and works all employees with the threat of termination if they call in sick.. So watch out for sneezing/sniffly servers. Besides that, great place to hang out, get stuffed, get drunk/play! 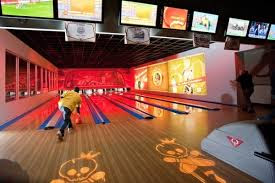 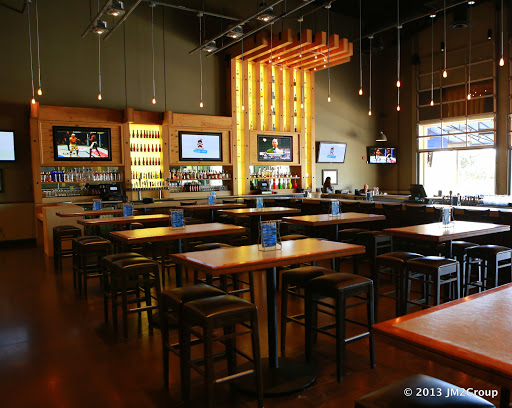 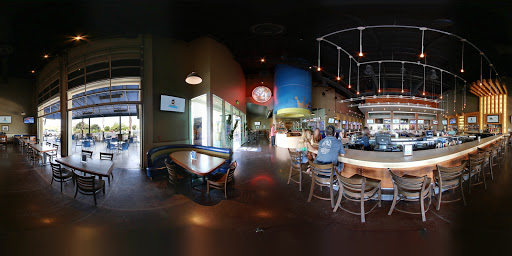 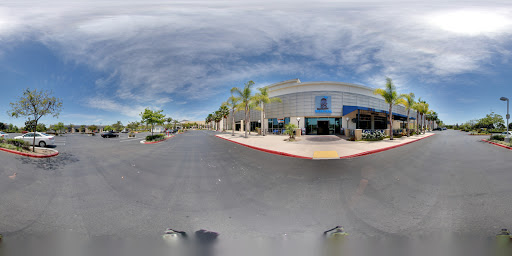 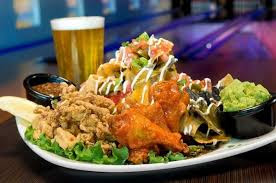 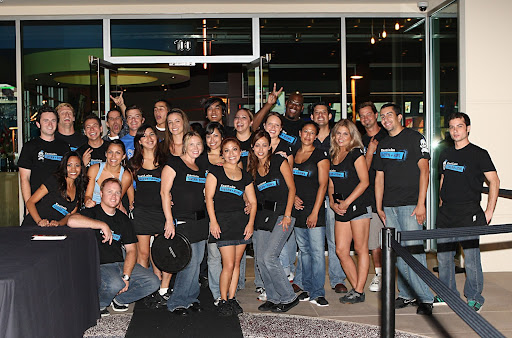 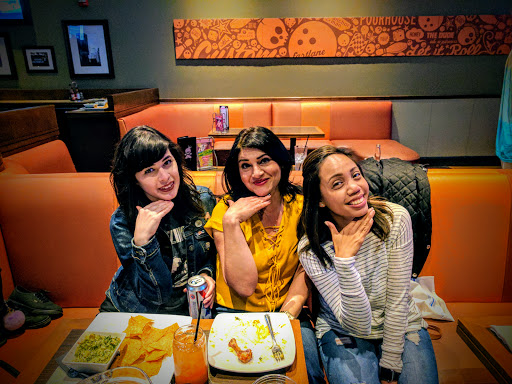 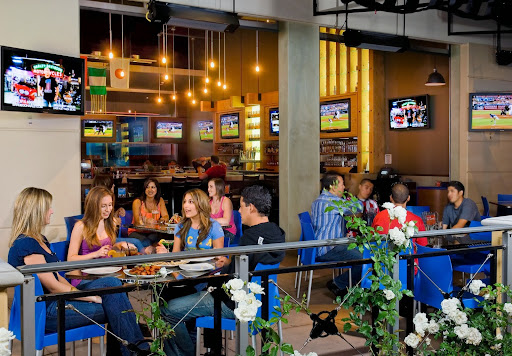 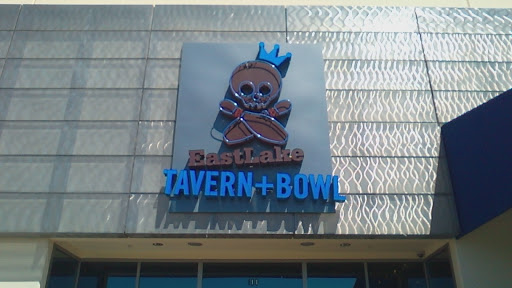 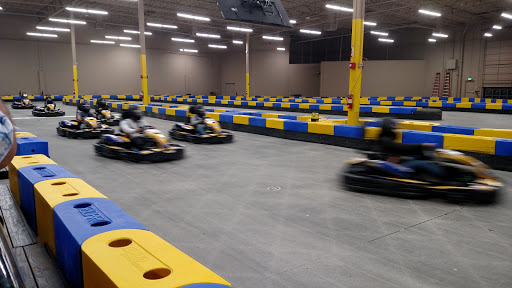 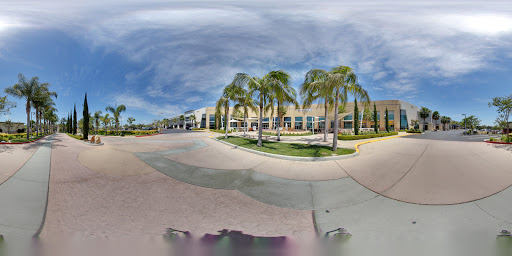 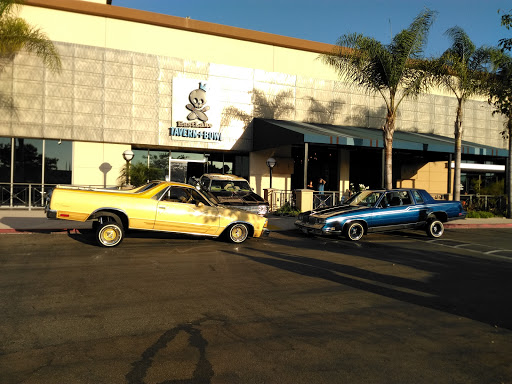 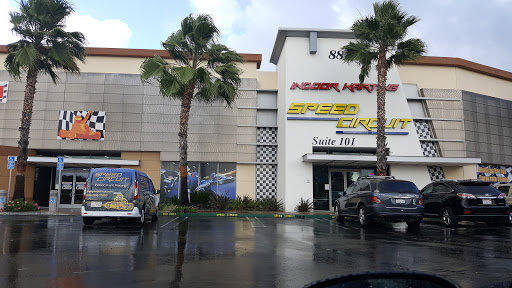 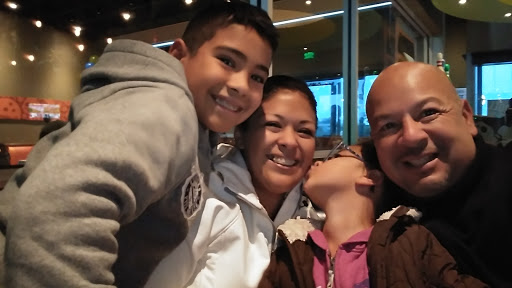 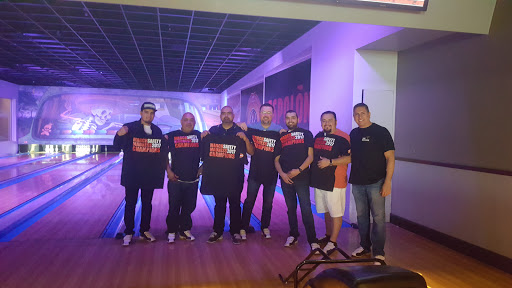