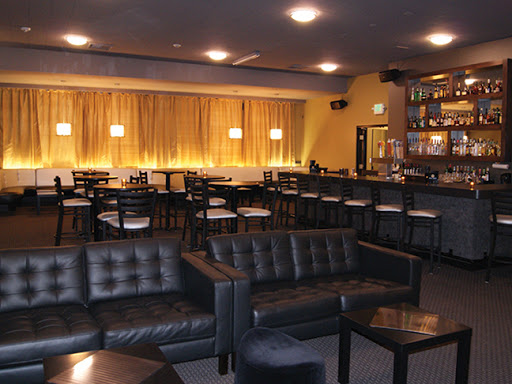 My first time at Helium was at a Friday 7:30pm show. Im glad I spent a few extra dollars for the reserved seats. Not having to wait in line for General Admission totally made up for the extra cost. (If you do get GA tickets, its worth noting that we arrived around 6:30 and the line already had around 30 people queued up.) Drinks are a little spendy, $5 for domestic pints, $6-$7 for micros. Mixed drinks were $9-$12. I didnt see a price for well drinks, and didnt think to ask the bartender. Food is also a tad spendy, but not much worse than any other restaurant. $6-$12 for appetizers, and around $10-$15 for entrees. Our tab for 2 people (4 micro pints and 2 entrees) was just over $50. Staff in the showroom are extremely busy trying to take all the orders in the 30-ish minutes between when they start seating and the show begins, so do yourself (and them) a favor and look over the menu before the show (either online, or at the attached Hawthorne Lounge bar area) so youre ready for them. Our server just got to our table right as the opening act was starting. Street parking is easy enough to find if you dont mind walking a few blocks, but beware: most spots within 1-2 blocks are only 1 hour or 2 hour parking. Not sure if they enforce after 7pm, but I didnt want to chance it, so we grabbed a no-limit spot an extra couple of blocks away. Once the show started, the atmosphere was nice, if perhaps a bit dark. It was similar to being at the movies, and it took me a second to adjust to trying to eat in the dark. Tables are pretty small, so if your group has more than 3 people, it can get cramped quickly if you order food. I had a hard time finding info about the seating layout, so I figured Id do my best to describe it in case anyone else was interested. Imagine a baseball diamond. The stage is at home plate, and the reserved seats are the infield, GA seats are the outfield. (Though its a much smaller room than a real baseball diamond. its maybe 20-25 feet from the stage to the start of GA seating) There didnt seem to be many "bad" seats, (maybe if youre tucked up in one of the far corners of the GA area, but from my viewpoint everyone had a clear view of the stage.) The sound system was pretty good. As long as comics are talking into the mic, you can hear them comfortably, but if they turn away from the mic, the sound doesnt carry very well. But, this is probably true of many clubs that arent specifically designed as an auditorium. In conclusion, Id definitely go again, and Id definitely get reserved seats again, though instead of killing time in the Hawthorne Lounge area before the show, maybe Ill wander over to one of the other bars nearby. Just keep an eye on the time, since tickets only become available 2 hours before showtime, and expire 30-45 mins before showtime, so make sure you pick up your tickets somewhere in that ~90 minute window.

Went to see Patton Oswalt on June 30 and paid quite a bit for the tickets. It was worth it for him, because he is an amazing comedian. That said, I will NEVER be going back to Helium Comedy Club. This is my first comedy club in Portland, so I cant speak to whether ALL the clubs in this town are like this. I will tell you that I have plenty of experience with comedy clubs in Florida, and they are not at all like this. When I asked the waitress at Helium if they were enforcing the 2 item per person rule, she very quickly said, "Yes, ALL comedy clubs do this, its the only way we stay open because we dont get any of the money from the door cost." ALL comedy clubs do this? The Improv didnt... Well, whatever, fine... its Patton Oswalt, suck it up, right? So we ordered the 4 cheapest things on the menu. The Lemon Creme Brulee was delicious. And they had something on the menu called Helium Barrels, some sort of potatoes with a spicy ranch dip. Okay, we ordered it. We received... tator tots and ketchup. O_O So, they pack you into this club like sardines, put 4 people around a table the size of a dime, and then expect you to order food? We didnt know the other couple we were crammed in with, which was okay, they were nice enough, but I felt irritated on their behalf when the waitress came, in the middle of Pattons set, and told the couple they hadnt reached their 2 item per person requirement. Besides the fact that all 4 of us missed the joke Patton was on because the server came to talk to them, I really didnt like the servers response. The couple had brought in drinks from the bar just outside the doors where they have you wait before the show; the server knows this, she picked up their empty glasses. And yet, apparently, no matter how much you spend outside, it still doesnt count for the 2 item minimum, because she "cant keep track of whether or not they actually ordered anything outside". WTF? And another thing, these freaking servers were getting in the way of the show. I had a server stand right between me and the stage, so I literally could not see Patton Oswalt for at least 5 minutes, while she argued with a couple in front of us. The entire time, the servers were doing this, crossing in front of people, crossing in front of Patton. And our server kept interrupting us to pick up empty glasses and plates, "Can I get these out of your way?" NO, just leave the crap on the table, we miss jokes every time you bother us. What a ridiculous venue.

I have mixed feelings about this place. I have been to 3 shows now. Most recent being Gilbert Gottfried, and it was, by far, my least favorite experience of the 3. He was pretty awful. Pros: Location. Lots of street parking. Food and drinks are good. Comedians tend to be pretty damn hilarious. Love seeing local comedians. I can only compare this place to Harveys since that is the only other comedy club I have been to, and it is MUCH better than Harveys in my opinion. Cons: You have to purchase 2 items (food/beverage). I know this is pretty standard, but I agree with others that it is a bit ridiculous on top of the price of the tickets (we paid $23.60/person online for regular tickets). PLUS, like other reviewers have said, if you purchase drinks or food in the lounges prior to the show, those items do not count toward your 2 item requirement. Pretty lame. There are also some ridiculous policies about picking up tickets: The following are the required times of arrival based on purchase : * General Admission tickets must be claimed 45 minutes prior to showtime. * Reserved tickets must be claimed 30 minutes prior to showtime. * Any ticket not claimed prior to this time will be released to the general public. LATE ARRIVALS ARE NOT GUARANTEED SEATS AND ARE NOT ENTITLED TO A REFUND. I mean, do you want customers or not? Dont be so stingy Helium! The line to get into the show is very awkward and crowded. This needs to be changed. We got through it pretty quick this time, but last time we stood in line for a good 45 minutes. My biggest con/complaint is the service from the actual servers. We waited over 30 minutes after being seated to even get water or place a drink order. We actually had to ask for someone to help us. Our girl was pretty nice, but thats just unacceptable. Especially when you have the balls to require a 2 item purchase. The time before I had one of the RUDEST waitresses I have ever had. When we asked for a refill of our water, she said she doesnt get tips from refilling water. Well, you dont get a tip from me at all when youre a scab. And I tip pretty well. And am actually really nice. So dont be a douche bag and Helium, dont hire douche bags. Overall, I would recommend. Its a fun experience. Just know what youre up against. 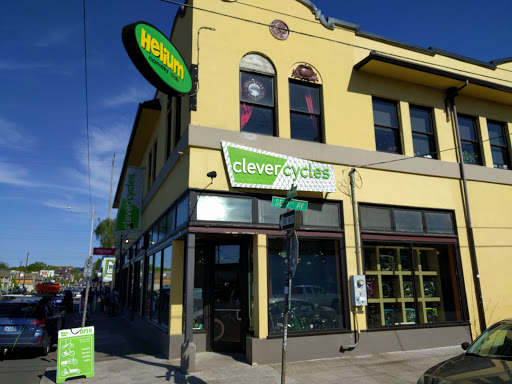 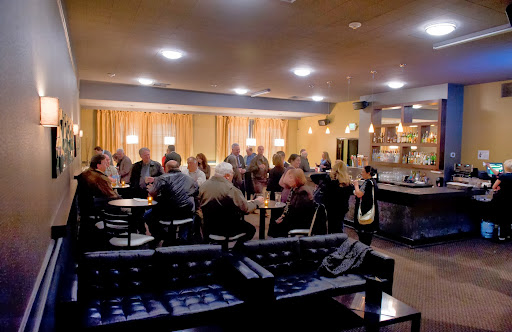 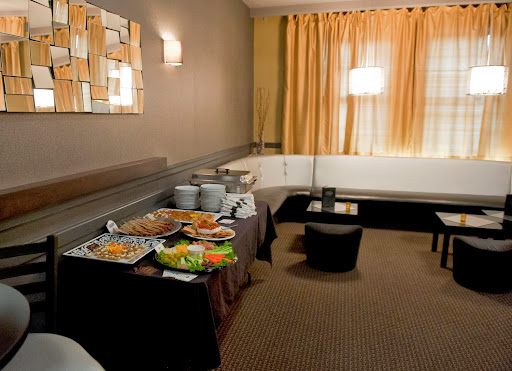 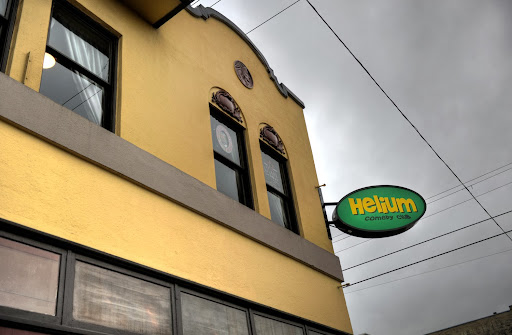 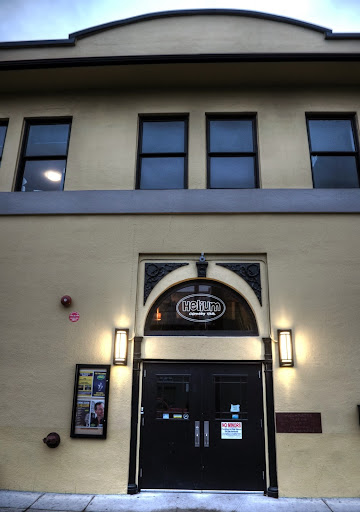 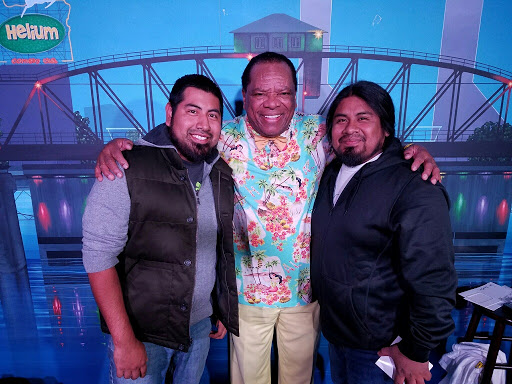 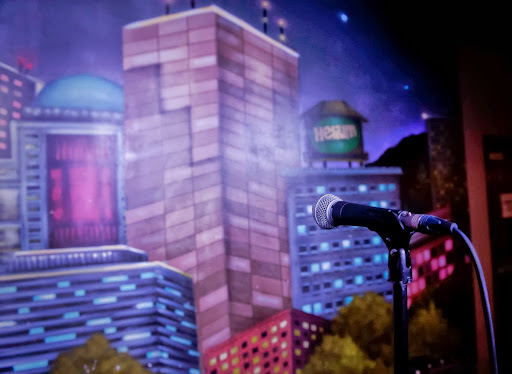 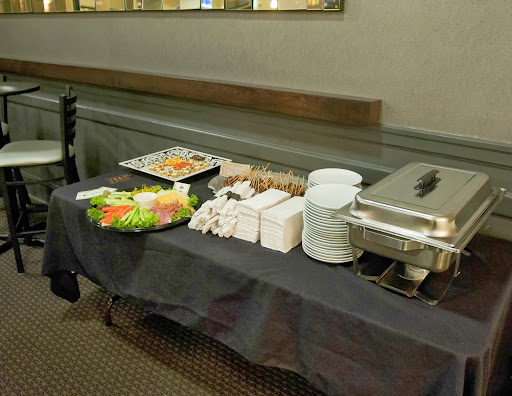 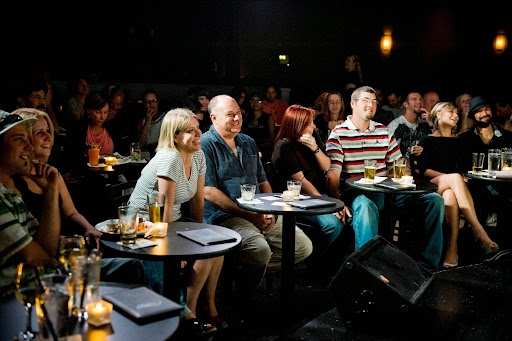 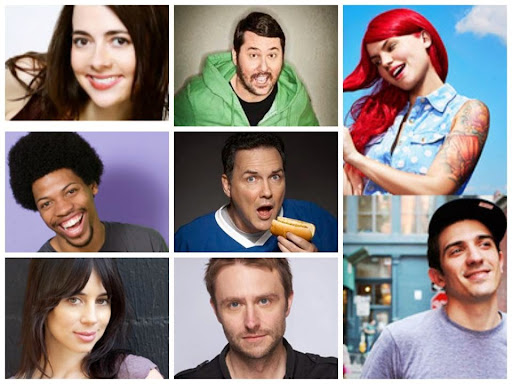 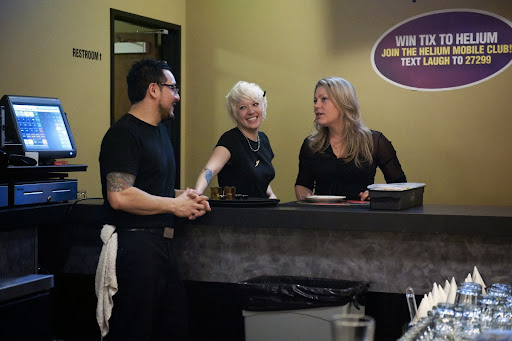 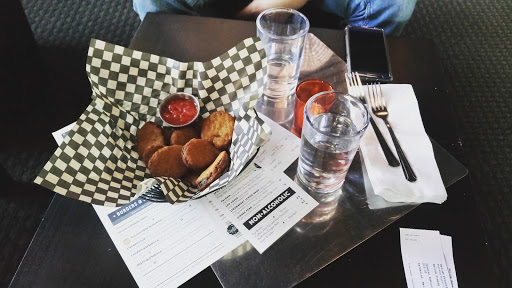 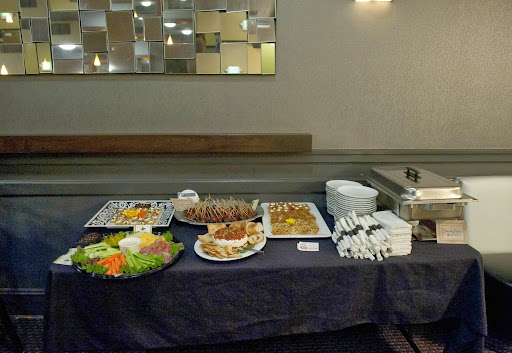 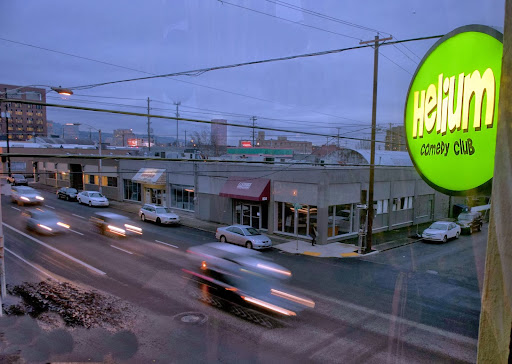 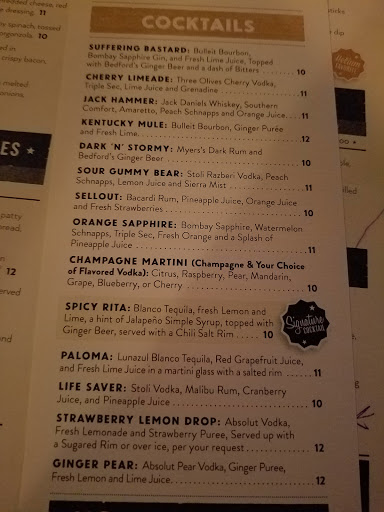 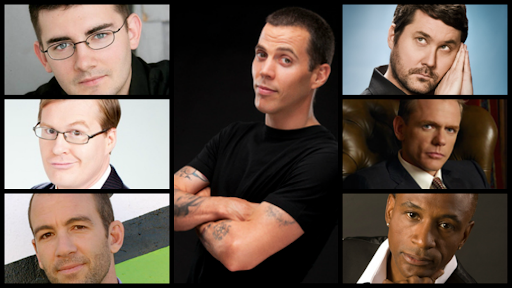 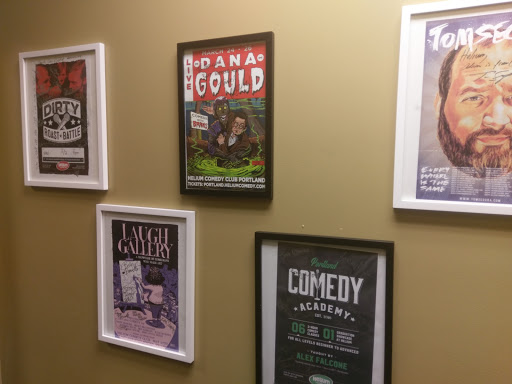 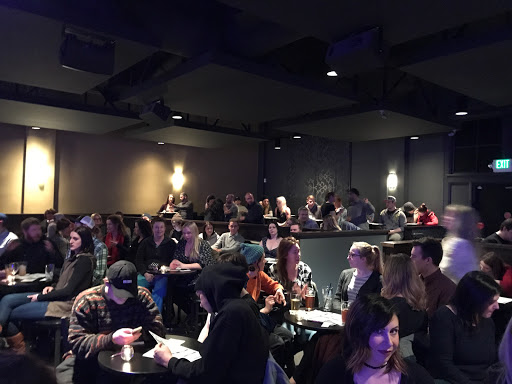 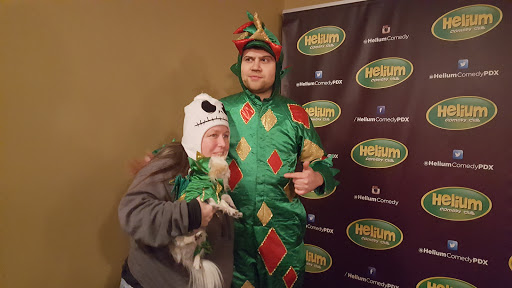