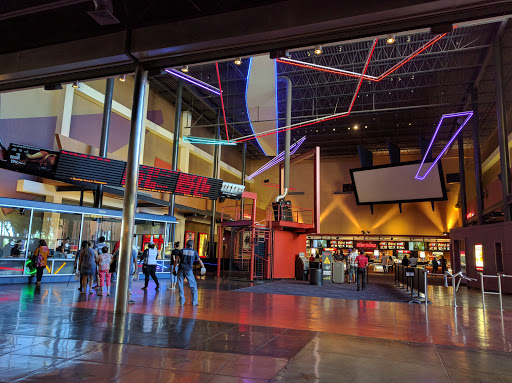 This place doesnt deserve one star but I cant give them zero stars. Lets begin with the fact that we werent even an hour into our film and a power surge happen which led to the screen going black. Granted that isnt their fault - but just wait Im getting there. So the film didnt even pause or stop when the screen went black. After five minutes of me and other movie viewers informing the workers that our screen was down THEY FINALLY STOPPED THE FILM. When the film came back on it skipped ahead thirty minutes (I know because Ive seen this movie already). Again I went out and informed someone but NOTHING was done about it. Ten minutes later another power surge happened which led to the film blacking out (again not their fault - Im getting to it). My friend and I finally had enough so we decided to go to guest services to get a refund and a readmittance (since one of their workers told myself and another gentleman thats what we would be receiving). So when we got to guest services myself and others were very annoyed and I had the pleasure of speaking with the very rude and condescending Manager - Estafania. Let me just note that she already had an attitude before I even started speaking with her. I asked her if our refund would be for the normal value and she replied in a condescending manner with a laugh, "no just for what we purchased." Which was $5 since it is the celebration weekend. I didnt have an issue until she started to smirk and laugh because we asked if we could get a readmittance pass. She laughed and said, "no it wasnt our fault and the other stores had power surges too." She continued with her attitude so I requested to speak with another manager. I spoke with her manager about her attitude but he also had the audacity to tell me that the movie didnt skip ahead until I informed him I already had seen the film and knew it did - which made him rethink his lie to me. I was so done and frustrated that I stopped arguing about the readmittance pass and left. So in conclusion - their customer service is horrid, their managers that speak directly with customers are rude, and no one is on the same page with whether you get a refund and/or readmittance since I was told multiple things. The experience if you dont have to deal with their workers and managers. However, you have been warn. Just walk away from the Harkins Mills theater and go to the one at the Chandler Mall. Thanks, have a great day!

I normally go to this imax because its relatively close to my house (aprox. 20 minutes away) usually the experience is standard nothing exceptional about it. This time however was terrible. We went to see the jungle book this evening we got in (by the way theyre doing this whole assigned seating thing which sucks) got seated no problem lights go down movie starts and this group of girls in front of us starts taking selfies. Not super young girls mind you grown women. So flashes are going off and I ask them to stop. They proceed to start calling me names. (Im 25 and these ladys were at least early to mid 30s) so I went and got the manager who proceeded to tell me even though the movie had started that she couldnt tell them to stop because people were still buying tickets and entering the theater. I think by now everyone knows the same general etiquette of turning off your phone I dont even care if the lights on but the camera flash was ridiculous. So the manager told me I could either attend a different showing or move seats but she wouldnt tell them to turn off their phones. All in all it was bullshit that I paid my hard earned money to not be able to enjoy the show because someone else needed pictures of themselves watching the movie. And then to be told I had to move or reschedule was just rude. Never again.

So my partner and I went last night to see the new Conjuring 2, mind you Im 19 and my partner is 21, and we had a 16 and 13 year old with us. The cashier rudely told us that we had to be their parents for them to enter a rated R movie , and where do they have that posted anywhere? Maybe a sign? A flyer ? No, last time I checked, you have to be accompanied by an adult , which they were. The cashier was also annoyed that I asked her why she needed to see our IDs , and she replied " well because its Rated R!" I was literally appalled at her attitude, and she was even more annoyed that we all had separate transactions so she told us "okay well you guys can speak to the manager hes right there" and after we purchased our tickets she was like " you guys can step to the side". Just when things couldnt get more annoying , the manager preceded to say that they never make exceptions like this because Conjuring is supposedly really busy for their opening night , and to top it off he was talking to us in a horrible attitude as if we were illiterate or something , being spoken to the way we were by a cashier and a manager was absolutely insulting to us. Definitely Wouldnt recommend this location for premier nights.

Horrible customer service! Took my family twice in one week to see new released movies. Both times were told to go to the wrong theater! REALLY! The last straw was going to see Harry Potter with my grand children. We got there early to ensure we would get good seats. I asked 3 different employees after we got inside and all them insisted we were told the correct theater. I finally checked again with guest services who told me the correct theater. We had 5 minutes to get in and find a seat "together" for HARRY POTTER. It is absolutely ridiculous to me that no one there seemed to care. Even guest services tried to blow me off saying "it is on your ticket". I spent well over $200.00 in one week there and got nothing but attitude. Even the manager acted like I was making a fuss out of nothing. Seriously people, when going OUT for a movie is so expensive (just for the tickets) and lets face it....its not rocket science to know which theater the movie is playing in....can we at least pretend we care?! If you go, go early enough to do their job for them! I will drive out of my way before I ever give them one more dime of my money.

The first thing I rate on is the picture quality. For a facility that is very spacious and appears very nice, the picture quality was lackluster. At least in auditorium 8 it was. Ive already seen Wonder Woman in IMAX 3D, IMAX, RealD3D, and Standard Dolby Digital (it was a good movie, sue me) and could tell this experience wouldnt measure up the moment I walked in. Not even with my standard 2D showing experience. It was clear that the picture projection was tilted and blurry. This is a nice theater with gigantic auditoriums with stadium seating, but the films themselves and are what theaters are all about. With the ticket and concession prices and hordes of foot traffic, this theater should put some of that money towards striving for the best viewing experience. In other words, either maintaining or replacing their projectors. I dont need cushioned and reclining seats (I dont know if this theater has those). All I need is picture quality that doesnt make me feel like Im wearing beer googles. I cant rate on much else because I almost immediately walked out. Very decent place. Not so decent projectors and picture quality. 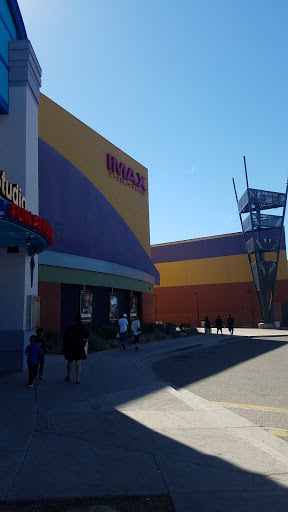 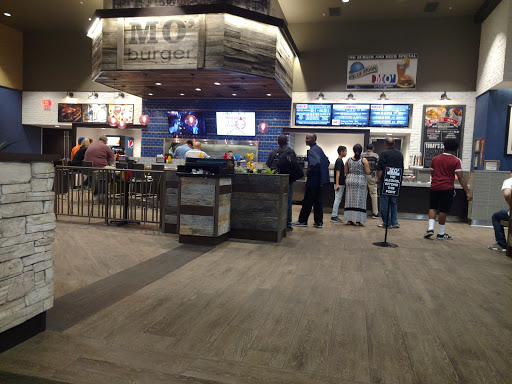 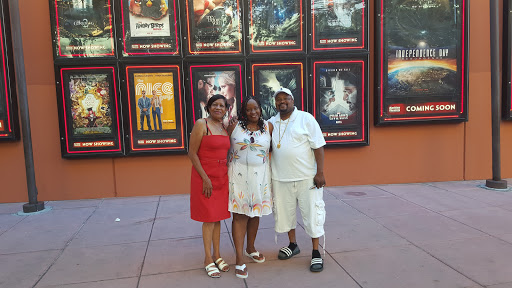 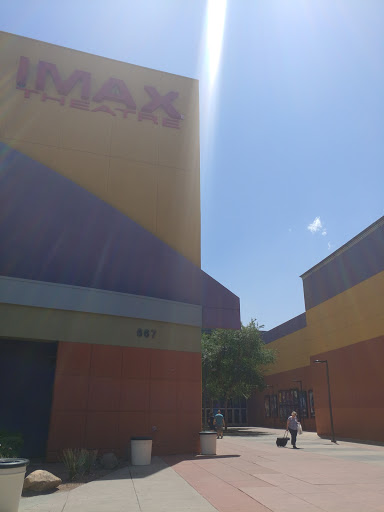 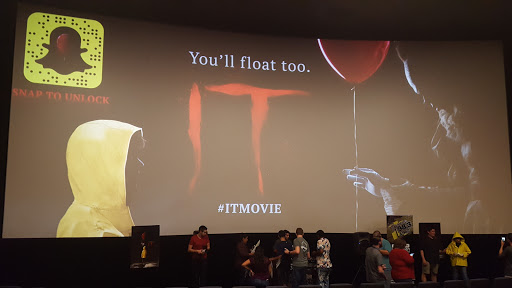 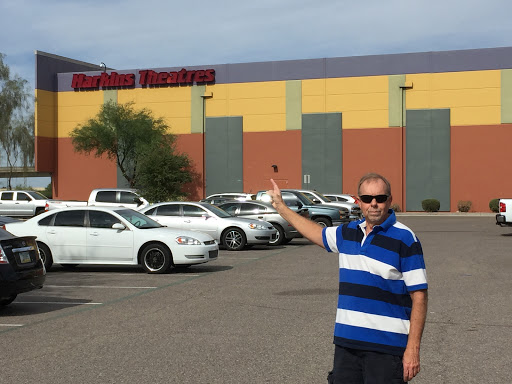 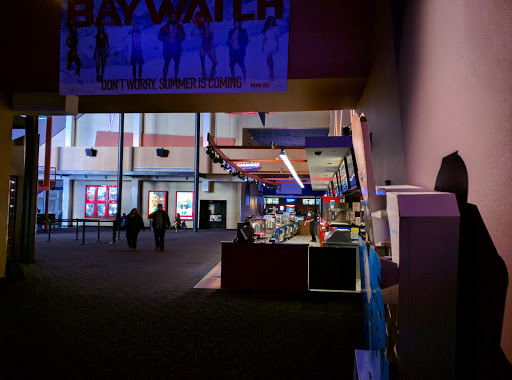 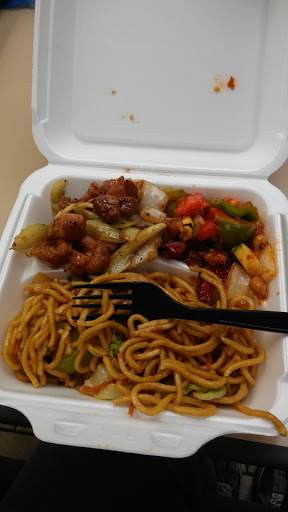 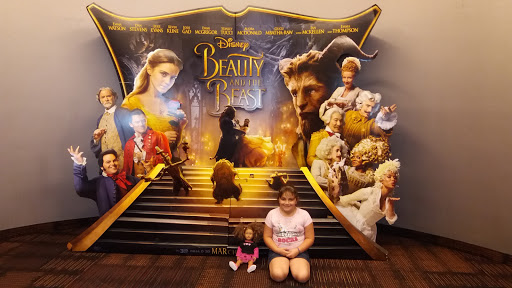 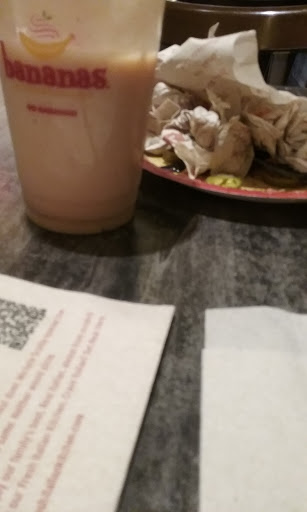 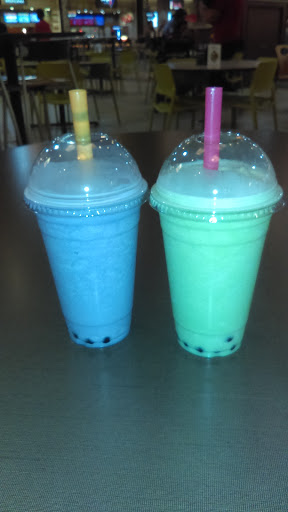 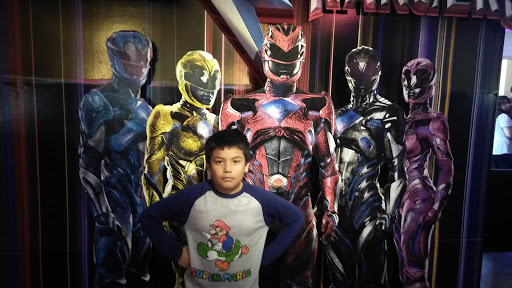