The rooms were admittedly smaller than what we are used to, but it was clean and the free shuttle service was really convenient. They will basically take you where you need to go in a 1-2 mile radius and to the metro if you need to get somewhere further. The fact that this place had a huge whirlpool/sauna/swimming pool was an unexpected plus. I didn’t care for the workout facility though; it had a very displeasing odor, something I wouldn’t care to breath for more than a few seconds, (the length of time it took to cut through to get to the pool area). The price I booked in the spring was around 124 per night. And the package included breakfast…. OMG breakfast. Shula’s morning buffet is dddeeeelllliiicccious!!! I don’t think we ever needed to get lunch anywhere because the breakfast was so hearty. Eggs to order, omelets, ammmmazing waffles, yogurt, fresh fruit, oatmeal, sautéed veggies… and much, much more! Anyway, I think the hotel was great deal and I was really glad we stayed there! P.S. The restaurant “Costal Flats” in the mall across the street was right on the money too. Yum! Darn, I’m getting hungry thinking about that trip.

Service was sub-par. At 8 months pregnant after taking a long international flight, was told there were not enough people staffed to help me with my luggage. Trying to check out was a nightmare. Was told my receipt would be delivered to my room in approximately 10-15 minutes once everything was separated out. After waiting an hour + late at night when I had an early morning flight I had to call to ask about the whereabouts and was told the front desk had been too busy with other customers to deal with my issue. Was told I again had to wait another 15 minutes. Again received no help with luggage even after asking. Overall the place seemed short staffed - another time I did not receive toiletries and after asking in the morning and after noon for some to be delivered, just gave up. Overall I was unimpressed. Im supposed to be staying for a prolonged period at another marriott property for 100+ nights and this experience is making me reconsider that. The nearby Hyatt regency I found to be much better - both in terms of comfort and more importantly, with service.

This hotel was disappointed !!!!! First day I checked in to this hotel, I tried to change my room because I didnt like it but the agent rejected my request because as he said they dont have any availability. Later on i found out he was dishonest and many room were available then I went back to the agent who had changed my room. This is not the only reason for giving them a bad evaluation But also The hotel was tiny and its furniture was too old. Breakfast, parking, and Wifi are excluded although its price was very expensive as compared with hotels in the same area. I had reserved this hotel for three nights, but After spending one night unsatisfied I had changed the hotel to another hotel which is Hyatt Regency Tyson Corner. I really like Hyatt hotel. It is a new hotel including parking and breakfast and cheaper than mariot. The most important thing that i like it at hyatt hotel besides its price and services was its location which is connected to Tyson Corner Center. I strongly recommended Hyatt Regency Hotel to everyone would like enjoying his stay at Washington DC

Ive been staying here for business the last 6 months and would not even consider staying anywhere else in the Tysons area. Reasonable rates, excellent service, conveniently located (next to mall, restaurants, offices)... what more could you want? Its always relatively quiet (though they do get very busy depending on the time of year) and they more than enough parking available. My only gripe is that, in order to get to the hotel when youre coming from the West end of Leesburg Pike, you have to go a mile or two down the street and make u-turn at a rather busy intersection. I guess they can hardly be faulted for that, though. The rooms themselves are clean if somewhat outdated, but thats Marriott for you. If youre looking for something more modern / refined, you might want to go with the Renaissance.

I booked a suite on a Friday night so I could go out with some friends and we could all come back to the room and crash so no one would have to drive drunk. We had the music on around 10. Not too loud but enough that you could hear it when youre talking. Background noise. Apparently we were talking too loud. We received a warning. We turned off the music. Not 30 mins later when no one was in the room I received a call on my cell phone that we needed to turn it down... No one was in the room. They have paper thin walls. Dont bother ever staying here. 2 stars because it was fairly clean. Other than that. Nothing. The little convience shop in the hotel was a JOKE. $8 for a small bottle of water. I walked to the shell gas station and bought a case for $3.

Staff members were professional and courteous. WiFi signal was strong even in elevators and my room (which was all the way at the far end). Good location (close to Metro, Tysons Corner, etc). Plenty of shopping and eatery options nearby. Decor was modern in the lobby and rooms, but the common spaces, such as halls, were very dated. The on-site facilities were amazing (pool and fitness center were superb). The dinner in the concierge lounge was just about the best of any Marriott Ive ever had. Paid parking during the week was fairly priced and open parking on the weekend was nice. Also, for the fitness buffs, the walk/jog around Tysons Crescent Plaza was great and there is a bike share very close by. I definitely recoend staying here.

Pros AC and Heat work Hot water for days No bed bugs Clean Really close to mall Free shuttle to nearby places Indoor pool and hot tub Cons A few rude restaurant servers 3 elevators that compete for worlds slowest lift. Rust and slight mildew in rooms No ventilation in bathroom leads to massive condensation in entire room Foul tasting creamer for in room coffee. Probably to get you to go downstairs for pseudo Starbucks. Very loose electrical outlets Slow Internet 1.00 charge to room for front desk connecting me to in house Internet tech support. Pool only open to 9pm. This threw a wrench in my evening plans But Hell, it was only 89.00!!

This hotel is a good hotel its aproppriate and clean. Although, ive once stayed for a month and i order shoes to the hotel with all the info it was recived by the front desk and signed they said it wasnt there no one saw it and i went to the store got the signature of the person kept on asking for days multiple of times and kept saying we dont know where it is we didnt get it !!! I went in the storage room and found it. I truly belive they tried to steal it but indirect way ( loophole by not breaking the law) if i ignore it and checkedout they wouldve taken it so theres no loyalty to the customer beware ofbyour bellongings! 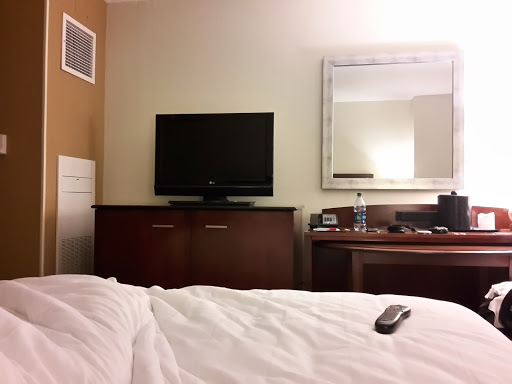