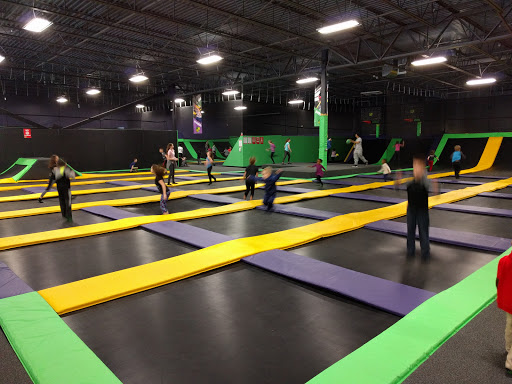 Dear Owner of Get Air, My kids and I had a lousy experience on Friday June 23 in the evening. I usually never leave online reviews, but your facility deserves an exception. The staff wear black/white stripe shirts like a referee. More than one parent saw the supervision by staff was "ridiculous". The staff are mostly older teens some of who stood around, cussed and talked about smoking pot. One actually asked my child to go get his drink bottle which was sitting only a few feet away. My child is not his servant. I guess he likes to order around kids. Other staff were at times occupied by talking with the opposite gender, sitting, playing basketball, or lying down looking at the ceiling. Unsafe behaviors are not addressed. For example, there was a small child, no more than 2 years old and 30 inches tall, who was jumping on the large trampoline park. He was almost crushed a couple times by big kids or adults. I realize you have Little Air" park reserved for small children. He belongs there. If his parents wont put him there, why cant staff relocate where he is supposed to be? On a different night, one teen jumper did a dangerous maneuver involving running on the trampoline, jumping onto a carpeted platform, jumping up in a horizontal position so he could put his foot on a vertical pole, flip in mid air after pushing off the pole, land back on the carpeted platform, the flip back onto the trampoline. Is this permitted??? The staff was 6 feet away and just watched and said nothing. You might want to discuss the legal risks with your attorney. On June 23, there was a jumper with a Go Pro camera strapped to his head. He told me it was a GoPro camera. We do not know this child personally. He was filming his friends but also strangers. He filmed my young daughter without permission and said"Youll be on You Tube". I complained to staff. Staff said GoPro cameras were allowed, but they asked the child to remove it. He did, but then he put it back on 15 seconds later. After all, it was allowed. You also might want to discuss this with your attorney, given the number of registered sex offenders that are out there. Other facilities do not allow jumpers to jump with phones in their hand or cameras strapped to their head. What if he collides with someone and the camera hits another person and they need stitches?? This is realistic. Allowing GoPro cameras strapped to a jumpers heads is an unsound policy and creates a negative experience for others. Also last night another jumper jumped too quickly across the trampoline park. He then jumped over the border onto the carpeted platform. Because he was going way too fast and his momentum carried him to far, he collided with my much smaller daughter. Fortunately no-one was hurt. This is an obvious violation of common sense safety. Staff were nowhere to be found. Dear owner, you are NOT getting what you are supposedly paying your staff for.

I took my son and a friend yesterday to Get Air. It was our first time visiting because we usually visit SkyZone. Upon arrival, we were promptly greeted by a very courteous staff. We arrived early and the kids were allowed to start after check-in. This was appreciated because of their excitement. I did notice that the trampoline areas were not monitored closely like at SkyZone. Adults, teenagers, youths, and kids were able to interact on all the attractions. At SkyZone, they separate the kids by age and weight to insure fair play and safety (especially in Dodge-ball) My son and his friend really enjoyed how Get Air resembled American Ninja Warrior. It was disappointing that the height of the basketball rims made it only possible for someone over 6 feet to dunk. SkyZone has three different size rims for all ages. This is where I have a major problem. I understand that these venues are high risk for injury. In addition, the waiver agreement (even for non-participants) clearly states the limited liability of Get Air. At the end of our time, my son landed awkwardly on his left ankle which caused him to buckle and cause injury. It was obvious of his pain because he was down on one knee in tears in the middle of the arena. I walked around and to the basketball area where my son was laying on the platform. Because he could not put weight on his injured ankle, I cradled him in my arms and walked all the way around the arena in clear sight of three employees monitoring the floor. I walked down the ramp to the entrance where four more employees stood and watched without emotion or concern. My son weighs 90 Lbs and I am 62 so we are easy to spot. At no time, did any Get Air employee acknowledge my sons injury, show any concern for his well being, or offer to assist me in getting him to the car. A stranger was kind enough to open the main entrance door. Do you train your staff to look the other way when visitors injure themselves to avoid acknowledging the incident? I was aware of the waiver and I wasnt looking to point blame or seek any legal action. It is a shame because the facility does offer an alternative to SkyZone. Remember, if you visit Get Air, that you and your kids are on their own.

Christ in a handbasket. I dont think Ive ever had a worse experience in my life. The people who worked there looked like emo sloths, and they sure have a grand old time blowing their whistles at anyone who does anything wrong. I jumped in the foampit, and the foam doesnt even go down more than one foot. I instantly broke all eight of my toes, and the employees laughed in my face. There were three homeless men who were jumping on the trampolines barefoot. You could literally see the gingivitis from their feet attach itself to the trampoline. Absolutely unsanitary. Lastly: the grape jelly. I just simply dont understand why there is grape jelly at a trampoline park. I have it coming out of my ears. Its all over my clothes, and its not even Welchs. Get Air is simply the worst trampoline park that I have ever had the displeasure of jumping at. Spend your money somewhere that has sanitary trampolines, safe jumping (flying) conditions, and real, Welchs grape jelly.

Way, way better than Skyzone! A month ago we took our daughter (8) to Skyzone as part of her b-day present. Last night, we took our son (10) to Get Air for his b-day. There is NO COMPARISON. Get Air is an order of magnitude better than SZ. Its bigger, has tons of ninja obstacles, longer trampoline runs for tumbling, and best of all, has more laid back employees who actually let me play with my kids. Go figure. The anal guys over at the other place wouldnt even let me jump in the same area with my kids. After 45 mins at Skyzone, we all wanted to leave. The guys at Get Air gave us the 2nd hour free even with the Groupon, and after 2 hours, we still didnt want to leave!! In a word, it was awesome!

The kids had fun but the amount of stuff to do is pretty limited, which may be why they have odd entrance fees. You can only buy time by either one or two hours and it wasnt cheap. Then they call out the wristband colors to tell people its time to go. So you may pay for two hours and only get an hour and ten minutes. The very young staff was also very rude to the mother of my son, she was hosting a party there. Didnt give her one of the party rooms (though at least two were not being used at the time), tried to prevent her from doing the party activities (cake and presents, seriously), etc. Cool place though. And the kids did have a blast. 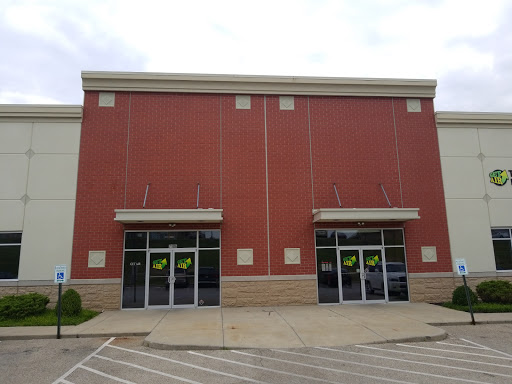 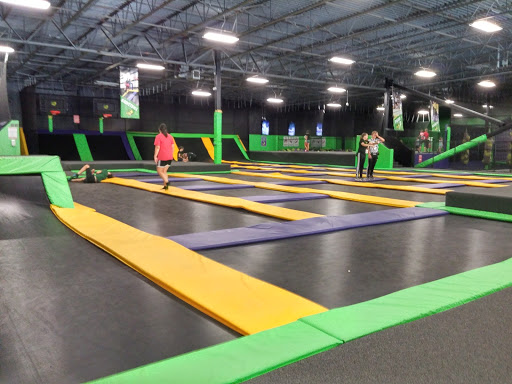 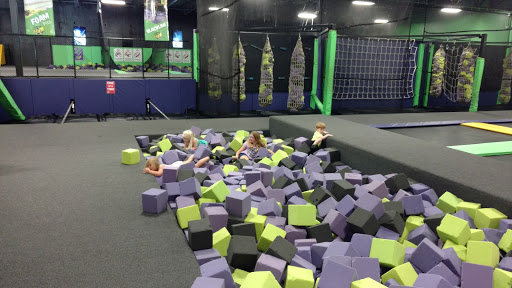 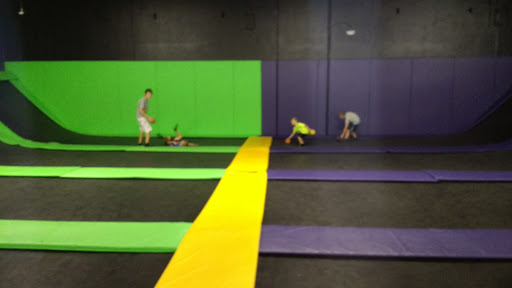 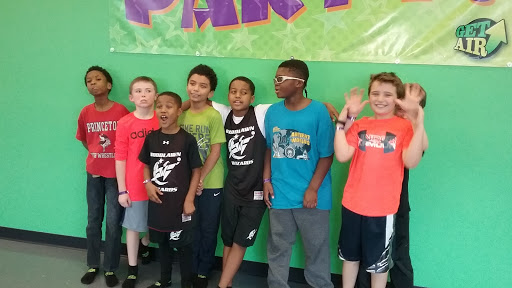 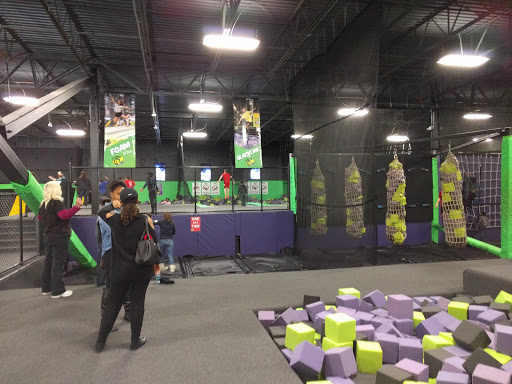 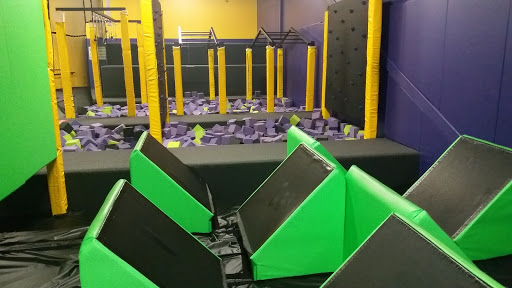 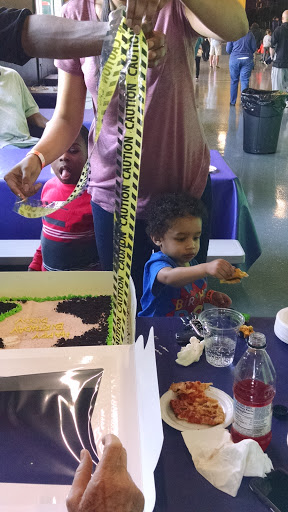 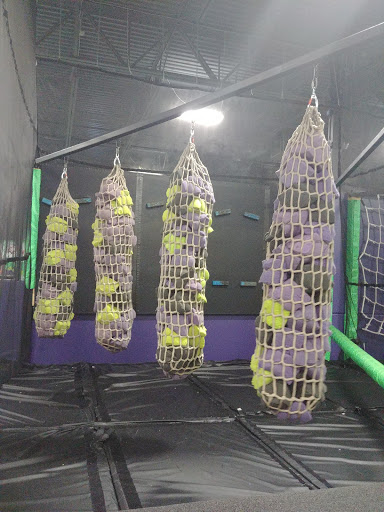 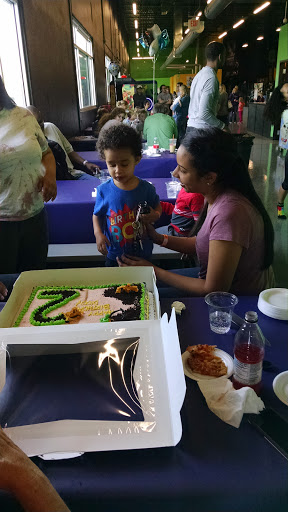 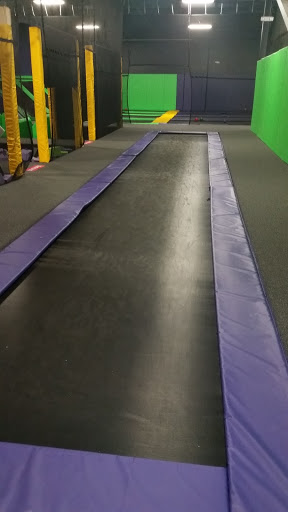 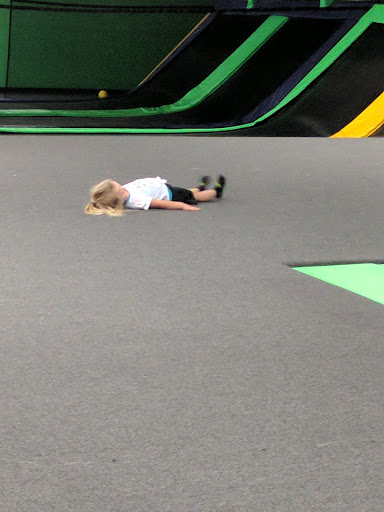 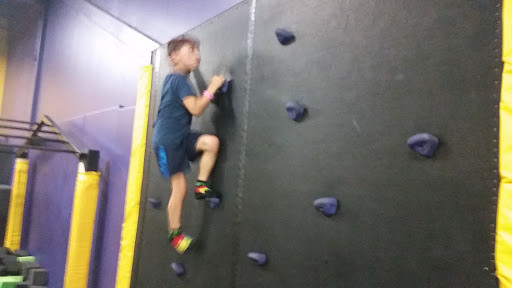 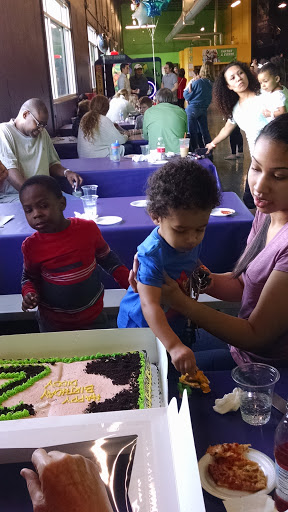 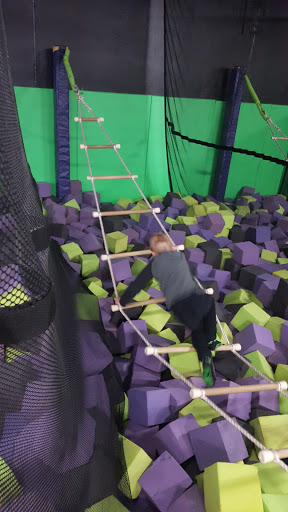