Located about 45 miles south of the Creation Museum is the Ark Encounter. Here a life-size full-scale replica of Noah’s ark stands. 510 feet long, 85 feet across and a total of 110,540 sq feet (with three levels). It is the largest timber-frame structure in the world and is astounding to behold. As we approached the ark my kids could be heard saying, “I know its going to be huge. . . oh my!” “It so big!” “It’s huge!” It’s difficult to articulate what it was like to walk beside and then into such a structure. Awesome seems appropriate, yet it is an overused statement, that has unfortunately been watered down in our culture. It humbled me and made me feel small in light of the powerful God that skillfully directed its construction. The interior displays were both impressive and informative while also being incredibly intricate in detail. Every possible question and skepticism I’ve thought of or heard was addressed from, “How did they fit all the animals on the ark and care for them?” “Was the flood global or local in extent?” and “Isn’t the flood just a fairy tale or story to teach a moral lesson?“ to questions I’ve never thought of such as, “How could they light the ark or get fresh water?” Beyond specific ark questions was scientific reasoning related to the Ice Age, the Grand Canyon, early civilizations, race distribution and languages–all fascinating, well thought out and scientifically supported. After our visit, I asked the kids to rate their impression of the Ark Encounter on a scale of 1 to 10 and what could have made it better. Hunter (age 13): rating of 10: nothing could have made it better. Ashlyn (age 10): rating of 9: could only be better if the animals in the cages were alive and could be played with. Quinten (age 7): rating of 3: the ark was ‘too big’ so it took too long to walk through (i.e. if God could have made the ark smaller, it would have been a lot easier on him today). Tanner (age 5): rating 5: he was ready to leave at lunch time but had a good attitude when we returned for a few more hours. Final thoughts: We unanimously agreed that if had to choose between visiting the Creation Museum or the Ark Encounter, we would choose the Ark. Our reasoning was based on our opinion that both offered great content but being inside the ark was an experience that you can’t get any other way. Some tips if you plan to visit the Ark Encounter: -Our family of 6 (with 4 kids ages 5-13) spent about 6 hours total at the Ark Encounter including our time returning to the car to eat lunch. Be aware that you are shuttled to the ark from the parking lot, so if you bring a lunch and leave it in the car it will take you longer to get to it. -The crowd was much smaller after lunch. Some of the displays that required more reading had a line. We skipped them and returned after lunch when the lines were slower. We visited mid-week on a Wednesday. I suggest avoiding the weekends or a holiday if possible. -You can purchase tickets online (including parking which is $10 if you can park in one spot, $20 if you take up two spots). -There is a petting zoo and zip lines at this location as well as camel and donkey rides. We did not visit the petting zoo here but I assume it is free while the other activities likely require an additional payment.

I am NOT an atheist nor am I a Agnostic nor am I a subscriber to anyone single christian based religion . I do not belong to a church, nor do I wish to. But I do believe in a higher power. With that said: Over the thousands of years the bible has been translated over and over, and although the story of Noah and the Ark is one that does teach a lesson, I have to say, from a Historical and Scientific view point, the story of the Ark and Noah and the animals as told in the bible just...HORSE PUCKY. That does not mean I do not believe that there was NOT a flood, nor does it mean that I do not believe that Noah indeed save his family and some animals on a boat/Ark/Raft (call it as you wish) Most likely the flood was a localized flood. Most likely caused by a ice damn from the melting glaciers to the north that gave way due to rising temperatures. The problem with most Christians that are my friends, whom I have this very same discussion with, believe that evolution does not occur, and that it is God himself that created everything. From that perspective than, if evolution did not and does not exist, then the ARK would of had to hold a LOT of critters. Not just 2 elephants but 4. You have African and Asian, at least 10 Rhinos, because you have the White, Black, Indian, Sumatran and Javan, and then you have subspecies of Rhinos, so in essence we are talking about 16 Rhinos on board the Ark, 18 Giraffes, because there are 9 different species, 10 Hippos there are 5 species, and 80 Bovines of which there are at least 40 different species and sub species. Okay Ill stop but you see my point here? And I didnt not even list the birds, snakes, reptiles, amphibians, pigs, hogs, canine, feline, insects, arachnids, Apes both new world and old world. Scientifically speaking, 2 of each kind of Species is NOT enough to keep a SPECIES from going extinct. there is just NOT enough genetic information to protect a species from the ever growing threat of bacterial infections, viral infections, fungal infections, protozoan infections. I believe in the flood, I believe in Noah, its just that his boat was a little smaller, carried him, his family, a few sheep, goats, seeds to survive...that to me is more believable then a world wide flood. 98% of the water on the planet is in the oceans. 1.6% of the planets water is locked up in the polar ice caps and glaciers. 0.36% is found underground in aquifers and wells. 0.036% of the planets total water supply is found in lakes and rivers. The rest of the water on the planet is either floating in the air as clouds and water vapor, or is locked up in plants and animals. Your body is 65 percent water, so if you weigh 100 pounds, 65 pounds of you is water. But even if you put it all together, it still wouldnt be enough to flood the Earth. Not by a long shot.. Yes Virginia there was a flood, (see what I did here?) But it was NOT as epic as you were led to believe. Now, would I go to see this YES, so this seems like a great safe place for families and children alike...so enjoy the adventure, but keep an open mind....

This is a world class attraction. First, I love that the parking lot is a distance away from the ark, so you dont have a gaudy parking lot right next to the ark. The ark itself is amazing to behold as you are dropped off. Pictures do not do it justice. It is much bigger in person. The sheer size of it is overwhelming and really brings the old story of Noah to life. The ark is three decks high. The first deck gives you a good idea of what it might have been like to be on the ark. Its poorly lighted and simulates life on the ark, with the wind wailing and the waves beating the hull. You can hear the animals making noises. Thankfully, they didnt make it too realistic because it doesnt smell like what the ark would have smelled like. The second deck is my favorite and includes the giant door to the ark. The attention to detail is astounding. Make sure to take your picture by the giant door and see its connection to the cross. They even projected a cross onto the door to show its significance. The exhibits are very colorful and informative, with a few animatronic interactive exhibits that my kids loved. They especially liked asking Noah questions and seeing him respond. The third deck had a really good video. Be sure to watch the whole movie as it gives you a lot of good information about the reasons they built the ark. Very powerful. The third deck also has a number of exhibits showing the science behind the flood. This information will help anyone see how science has helped confirm the reality of the Flood. At the end of the deck are some exhibits geared more for adults. Theres a really neat exhibit about the history of the Bible including some extremely old texts and manuscripts, and even a Torah scroll. It was impressive. Whether you are a believer in the flood or not is irrelevant. Anyone could gain a lot of insight and have an enjoyable time here. Theres something for everyone. They also have some crazy looking obstacle courses and zip lines that we did not do. They also have a large outdoor kids area with a small petting zoo and panning for gold, etc. There is a restaurant on the grounds, which is convenient. Its a beautiful place with lots of animals watching you eat. There is a decent selection of food. It wasnt great food, but decent. I thought the food was overpriced, but it was a very enjoyable dining experience. Overall, we loved the Ark Encounter! It took my family of four about 6 hours to see the whole ark, the zoo, and eat. There was a large amount of people there in the morning. It was shoulder to shoulder all morning, but it thinned out in the afternoon. If you wanted to avoid the crowds, you might come late morning. We drove for 9 hours to get here and I think it was well worth it. 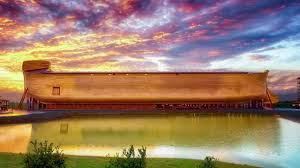 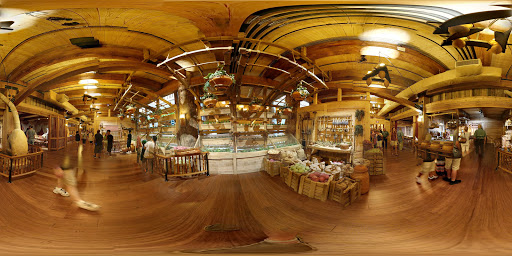 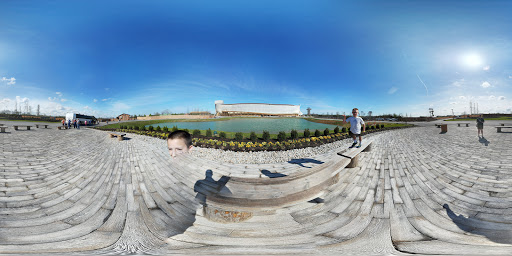 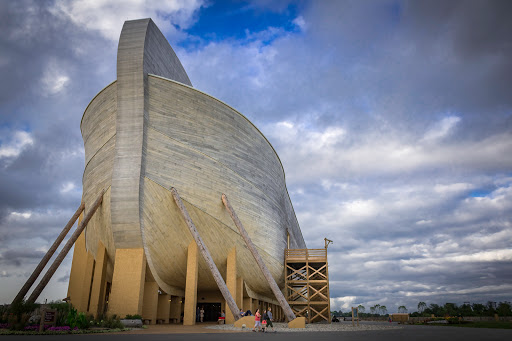 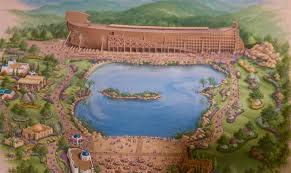 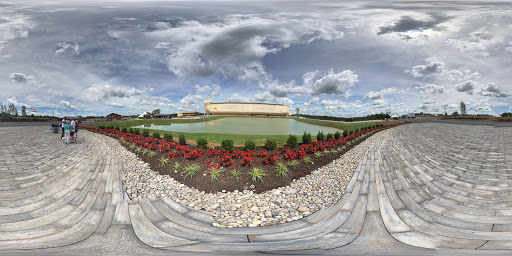 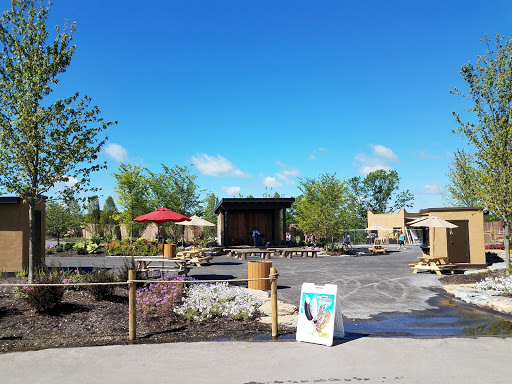 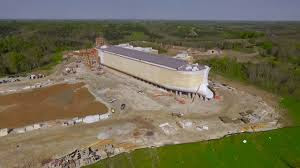 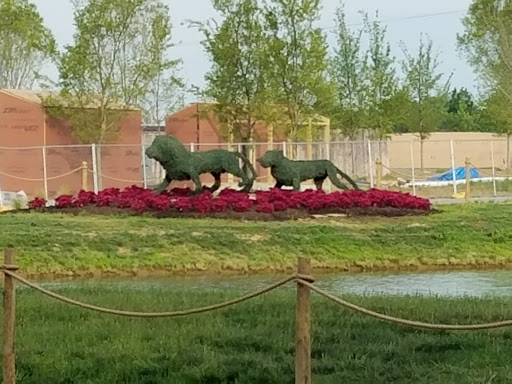 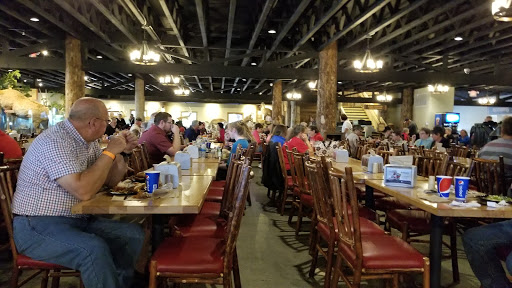 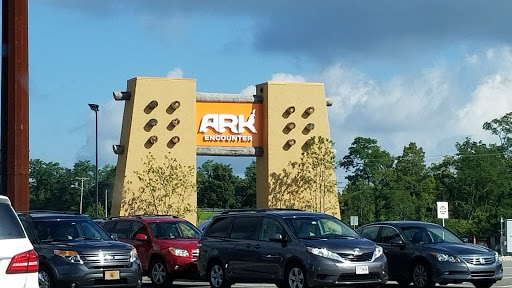 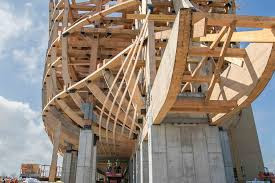 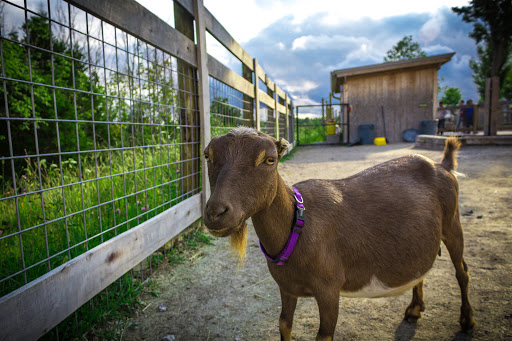 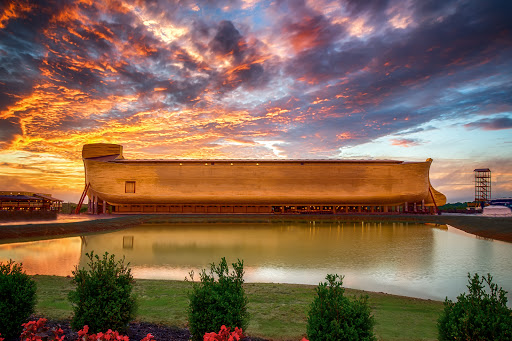 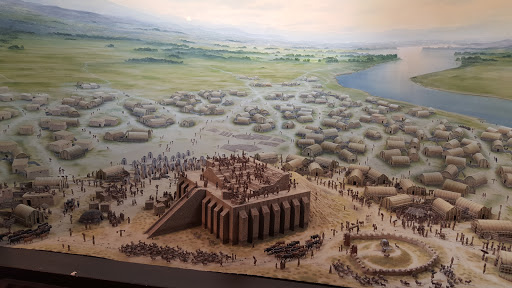 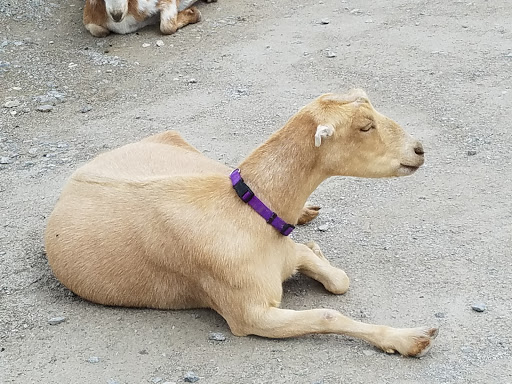