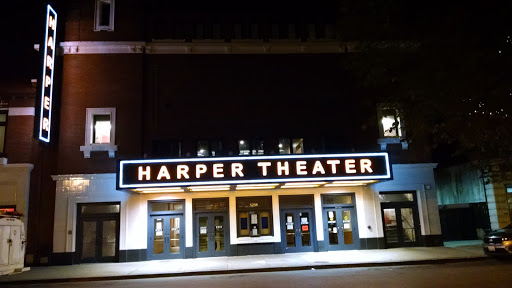 I truly am happy the Hype Park theater is back; good for the community and intimate setting. I will typically go to this movie theater for popcorn; so close to my home. On this Sunday evening April 10, 2016 the customer services was not pleasant from the start. I waited while the young lady was on the phone, I assume talking with a customer, she never acknowledge me; never said "I: will be with you in a minute"; never looked up at me until she finished her conversation. I order my popcorn to go; provided the money to pay; I was given $3.00. I made mention to the chaser that I thought I gave her $20.00; she replied "No, you gave me $10.00. I dismissed this; I received my large bag of popcorn, I asked how much are the rasinetsl I was quoted a price of $3.00 then $3.50 I paid for the rasinets; taste the popcorn and expressed to the cashier that the popcorn taste stale. Her reply was to shrug her shoulders and mumbles not sure if she said that it was made a few minutes ago; her work partner shrugs her shoulders a well. I request my money back; the dynamics change from the cashier being very disrespectful and in considerate and no professionalism when dealing with the public; she was the same way on the phone when or if she was speaking to a customer upon my arrival. I never received the rasinets; asked for the manager. Cashier is very rude as I expressed to her. I give one star due to situation that occurred on this evening. That cashier need to be monitored; the Manager was very nice.

OK, I went to this theater with my friend and we saw the movie 12 Years a Slave. The movie was really good by the way. Now, the theater is really really really small. When you walk in you are greeted by the person at the ticket booth. I was a little taken back because the worker were not very professional they were a little too jokey. Now, I remember the theater they had here before and it was like a regular old theater, but I was really excited when they reopened it again. So, I really had my hopes up for this theater. The concession stand did not have any candy only muffins, cookies, popcorn, and drinks. What show doesn’t offer candy? Lol. When we were seated by one of the ushers we thought the seats were really comfy but because of the leather or whatever material they used, every time a person got up it sound like they were getting off their grandma’s sofa with the plastic on it, and that was a little annoying. There is no vestibule, so you can hear the door slam when someone comes in and out the theater. The walls are really thin and you can hear the movie next door. The space itself is really small. You can maybe seat no more than 20-25 people in each theater give or take a few. I do like the modern look of the theater and I am very happy that the theater is back in the Hyde Park area. I would honestly go back to see another show at this theater only because I am an advocate of supporting the community.

A typical nice movie theatre has its rows sloped so that the highest elevated seat is the farthest back row. All the rows of seats in Harper Theatre are on a flat surface with random downward grooves rather than a progressively sloped incline. Thus many seats in the middle rows are at a lower elevation than the farthest front or back rows. For example, I was one of two 6 foot people sitting in the 5th row of an over capacity movie showing - unfortunately, from our view one half of the screen was blocked by the seats and heads of people in front of us because the row ahead of us was elevated higher than our row. We then moved to the front row, which was the only way to view the film without obstruction. I wonder if it costs more money and square footage to create a sloped theatre venue. Also the screens are fairly low quality. Small black dots are visible every 4 square inches on the screen.

If you go into this place as nothing more than a small neighborhood movie theater, Harper Theater is a good place to go. But you definitely have to go into it with tempered expectations. Even with the renovation and reopening its smaller than most of your other major theaters. Its another business that is on Groupon alot so if you can manage to get the deal (2 tix, 2 drinks, 1 popcorn, 1 snack), its a GREAT value. And one of the best things about the place is it allows you to pick your seats. Downside, again, is its small. So some things like service can be slow as at night, as they have the same people working multiple locations (ticket counter, food, etc). And because its small, noise travels. Also keep in mind this place is down the street from 2 major high schools. So its a chance you may get some rowdy teenagers.

The workers are rude and lack customer service skills. They have workers coming in and walking around the theater during the movie, the bathrooms stay pretty gross and they need a better variety of theater snacks. The Hispanic young lady thats a manager lacks customer service skills. Myself, along with my friends and colleagues who go to this theater have been apauled at how ignorant the people that work there are. It would be nice to keep this neighborhood theater up since it adds character to Hyde park. Maybe a business consultant could help them get on the right track. You have a wide variety of people from different backgrounds coming in, stop treating everyone like you are in the heart of the hood and youre afraid they are gonna rob you or something smh.

Was excited to have oir very own neighborood theater. However, having an option to pay for seats online yet still you have to stand in line to get the actual ticket before you are allowed to go to proceed does not make any sense. It was rather stupid. Also, the movie times on the google page and the actual website is different. Me and my wife walked to the theater with the movie time from the google site in mind, however, the actual show time was a couple of hours later. The staff was rude. They made me feel that it was my fault not checking the actual website and offered no apology for the wrong information, and she just walked away. No friendly neighborhood theater here. Customer service.sucked.

As I said on my Yelp review, if you go to this theater expecting AMC, Icon Showplace or any other major movie theater treatment, you will be disappointed. However, if you want to do dinner and a movie in the Hyde Park area or hang out with friends to see a movie in the Hyde Park area, then this is a great place! For years, I thought Hyde Park needed a movie theater and Harper meets that need. The theater is small, but its a neighborhood theater. Ive always had decent customer service; some employees were awesome and some were meh. Bottom-line, the place is not that bad, I would even say its cool. I have been here on multiple occasions and I will come back again. 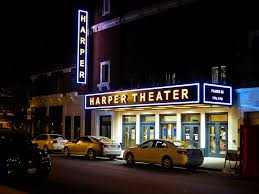 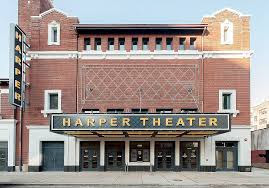 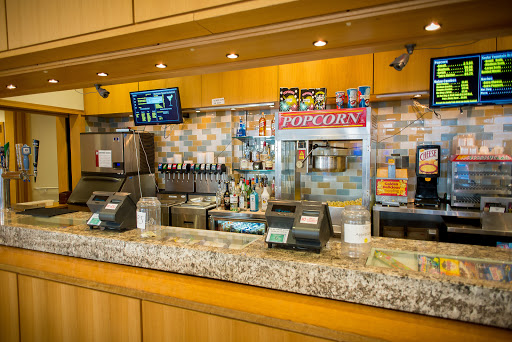 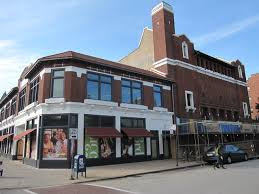 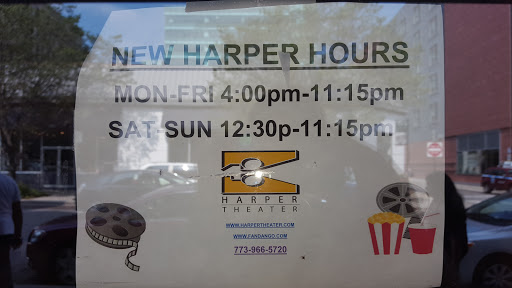 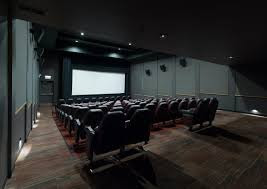 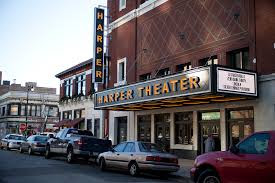 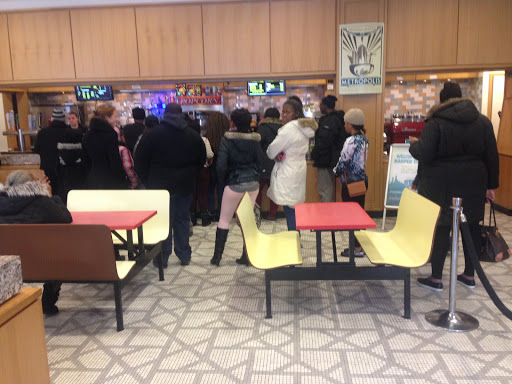 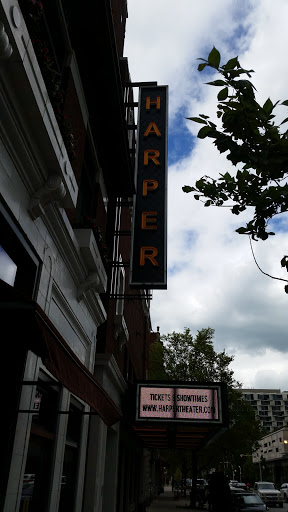 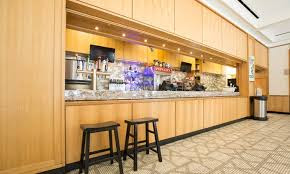 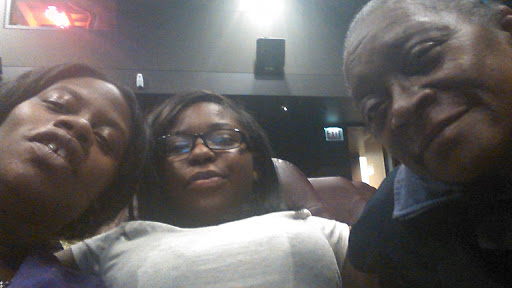 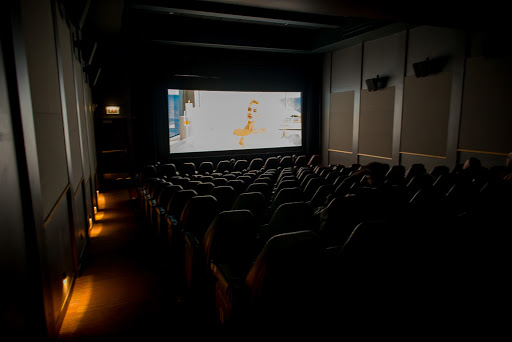 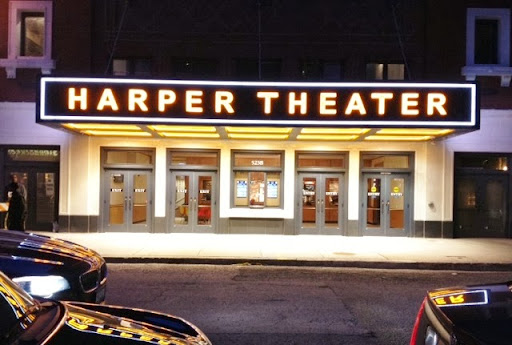 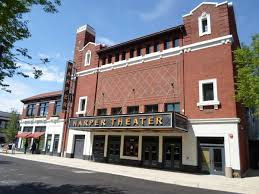 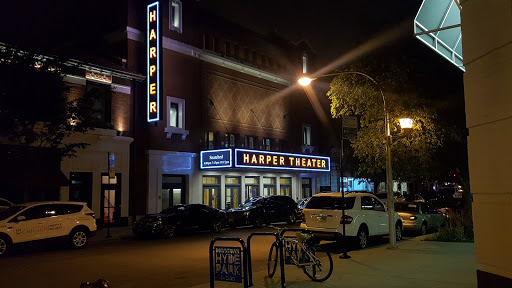 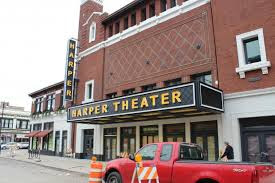