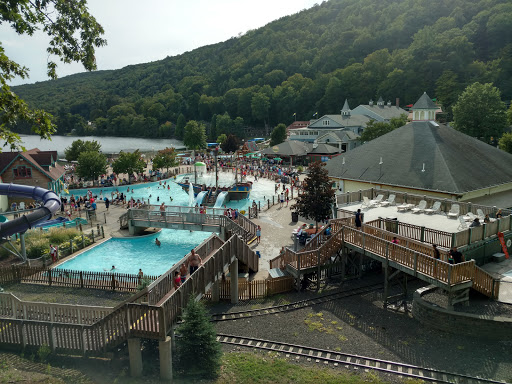 If there was an option for negative stars, i would do that. I use to love this place growing up, but after today i will NEVER recomend this to ANYONE. I was just at the haunted graveyard tonight, and a friend of mine lost her ticket WHILE in the park. So we ask one of the workers in the park what we should do, if we will be fine with just the reciept. They tell us to walk over to customer relations and ask them. Then they stamp our hands with some "glow" stamp, whatever. We walk over and tell customer relations that we lost our ticket to get into the graveyard, but we still have our reciept showing that we payed. They tell us that they cant do anything about it because theres no barcode on the tickets. That if she (my friend) dropped her graveyard ticket in the park, someone else would end up getting in for free. They made us f**king RE-PAY for something we already payed for. What the HELL is the point of a receipt if it comes to no use? Clearly annoyed we ask to talk to a manager. Manager tells us to either re-pay or dont go in. I work in retail, i understand how its tough to deal with customers sometimes, but when you have LINES of people with the SAME problem (losing a part of there ticket and having to pay for a new one when they have the reciept), maybe that should tell your company that you need to change something. They make millions of dollars off of this one night anyways. We unhappily end up paying for another ticket. While waiting in a HUGE line i end up calling customer services to speak with someone about this. While waiting for someone to answer, the call goes through some animated voice recording about how they are a "family theme park". OKAY how family thememed really are you?? People were DRUNK inside the park. Why are you serving alochol in a FAMILY themed park. ALSO what type of stupid "family" forces hundreds of people to re-pay for a lost ticket? Thats robbing people of there money!!! Finally we get towards the start of the graveyard enterance and all of a sudden a lady is walking out screaming at one of the security guards, very upset. The reason why is that RIGHT before you are entering, a guard takes any sort of bag/purse from you. This lady had $100 in her purse and its gone now. My friends bag also ended up getting taken and at the end of the "tour" we got it back OPEN. Her bag was closed before we left. Luckily she took all important stuff like money and IDs out of it before leaving it with some stranger. Dont you think before you even enter the park, when you are buying tickets that they should tell you that bags are not permitted in the graveyard instead of telling you at the last minute? Stupid. This entire place is stupid. They dont even have many rides if youre interested in the theme park. They only have one good ride (bolderdash), and even that isnt the greatest in my opinion. Dont waste your money here. This "family" runned theme park will only end up robbing you of your money. From now on I will take my theme park business to Six Flags. There Fright Fest is always pretty different where as Lake Compounce haunted graveyard is pretty much the SAME every single year. Very upset with the service, very upset with the park in general. Youve just lost many customers in one night i can garantee you that. Dont ever come here it is STUPID.

If you drive into the parking lot of Lake Compounce with your family and notice 40+ school buses and tour buses parked along the back of the lot RUN as fast as you can!!! I realized upon seeing all of the campers that must be inside the park that it was probably going to be a bad day. I was right! Campers had completely taken over the entire park. Running and screaming all through the park. Many of the counselors did not have their groups under control. The final straw for us was when we were waiting in line at the haunted house with a group of pre/teen campers in front of us. After about 10 minutes of waiting the second half of this camp group decides to join the line behind us. Immediately a handful cut us to join their group. We say nothing. Minutes later the group that remained behind us decided to follow suit and lift up the chain to go under and join their group as well. There had to be about 15-20 of them that did this to us. The counselors did not say anything to them to get back in line behind us. It is not fair to families with young children to have to endure this poor behavior. After a few choice words for the counselors who were suppose to oversee this group we left with our 5 year old extremely disappointed. We then went to guest services to voice our dismay with this mob scene of campers. The two people we spoke to agreed that it was a very busy day for campers, but did nothing to rectify our awful experience. After driving over 2 hours from Boston to make it to the park we ended up exiting after just 2 hours. It was a complete waste of our time and vacation and $140 on a family four pack down the drain. Terrible experience! Heres a tip for you Lake Compounce. Perhaps you could dedicate a few days a month specifically for campers to enjoy so that small families dont have to endure the mob scene of kids running around with counselors who cant control them or limit the amount of camps that are able to enter on a given day with the general crowd. It is not fair for the small families that come from far distances not to be able to enjoy their time there. We will never go back, nor would we recommend Lake Compounce.

Spent the day at the lake yesterday which was a Tuesday during the summer, myself 44 years old, my wife 37 years old, my daughter 7 1/2, my niece 22, and my other niece 15. We all really had a nice time, the water park though small in size really packs a good amount of rides and fun into it. The rest of the park is definitely small but is enjoyable. The smaller white wooden roller coaster is a good ride, pretty bumpy and shaky, my daughter went on that one and liked it and she is not a coaster fan YET!!! The big metal coaster zoomerang I think it is called was a lot of fun, my older niece, my wife and myself went on that and we all got off saying WOW!!! Now to boulder dash, OH MY GOD, seriously, this ride is crazy, absolutely ridiculous, very long, very bumpy, very shaky, please try it when you go to the park, it has to be one of the best wooden roller coasters you will ride. The family raft ride that is not connected to the water park is also very good, The first time we went on 4 times because the line was very short, and the second time later in the day we did 3 times with barely any lines. One of the best features of the park is the free drinks, not just pepsi but, sierra mist, mountain dew, root beer, and water, no need to buy drinks at all. Do not know about the rest of the food but, the chicken tenders and fries were excellent with huge portions. Now for the reasons I only gave 4 stars and not 5. The park in general is small, only 3 coasters. The park opened at 11:00 am but the water park opens at 12, WHY? That is about the only negatives that I can think of, as long as it is a hot day and you use the water rides, you should definitely enjoy yourself. Follow directions and address that is on the web site, perfect. 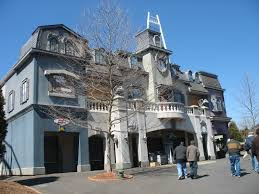 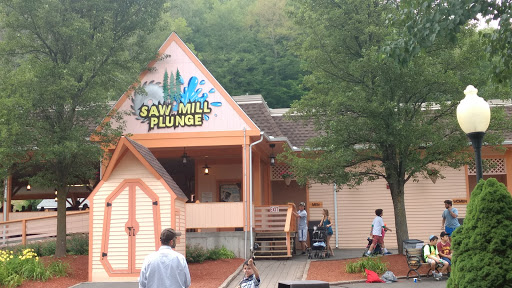 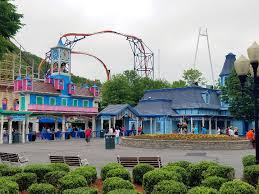 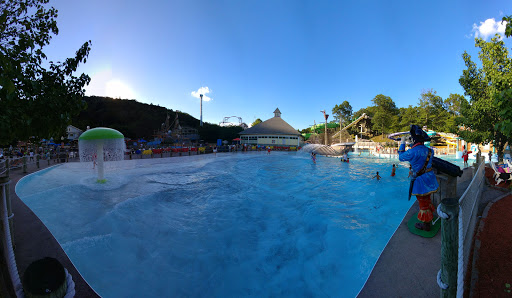 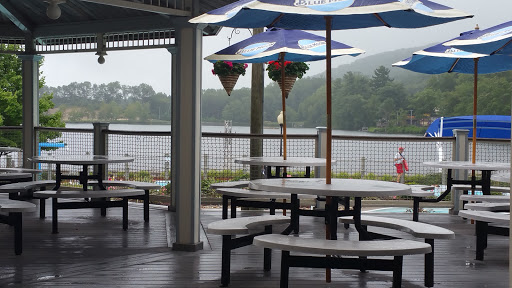 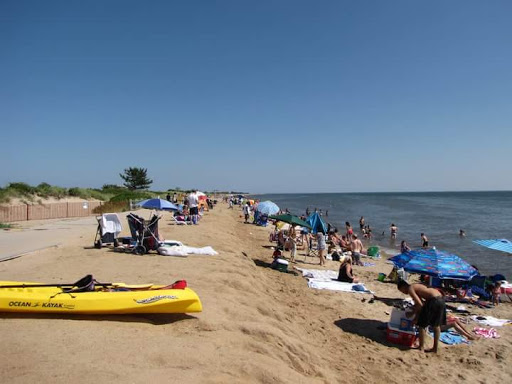 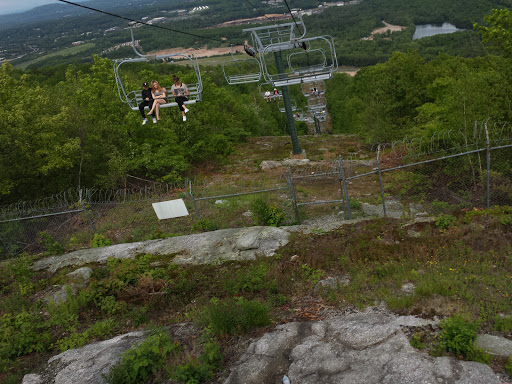 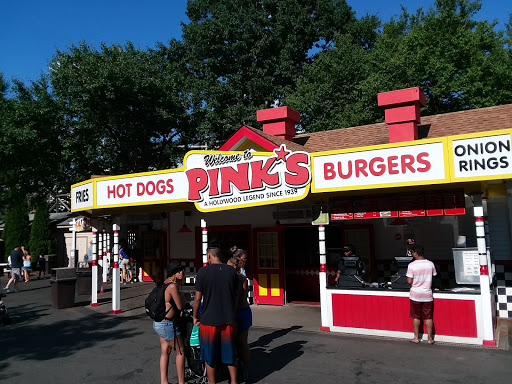 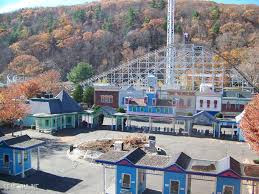 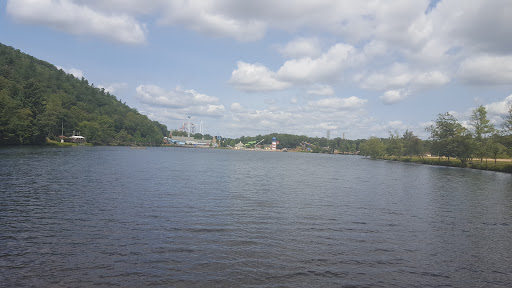 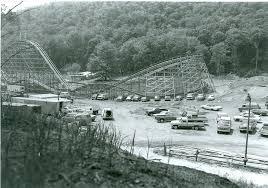 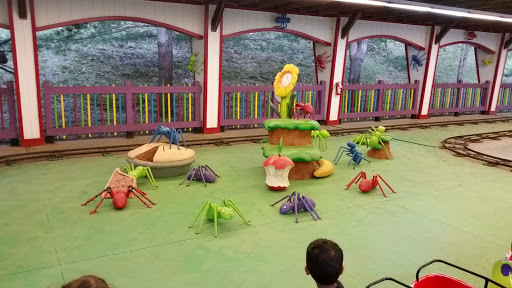 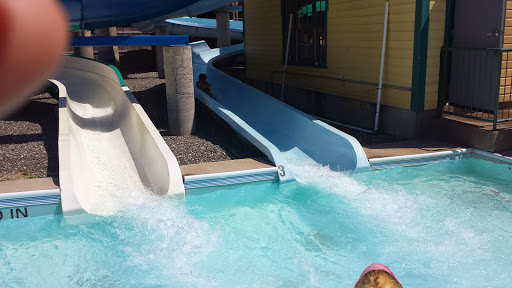 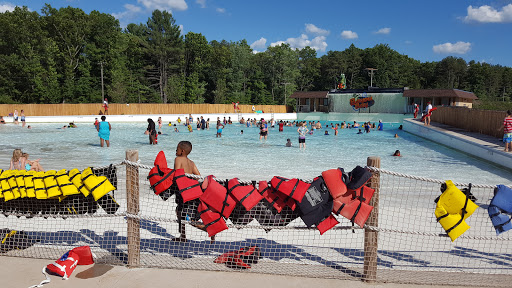