Very disapointed with the wedding services. At first everything seemed great but once that contract was sign problems started coming up. There were alot of hidden fees. We were contracted for 2400, but thats not including, Set up, Chairs, Gratuity, tax, wedding fee and bar. We wanted to do a $100.00 bar tab for our wedding party and they wanted to charge us 200 for the bartender. To set up some simple chairs, they charged us a $100. This strange wedding fee (i still dont know what it means) is $5.00 a person, so the bigger the wedding the more you spend. You hvae to get the wedding cake from them and thats $9.00 a person. Also for the rehersal our wedding planner didnt even help, she was there but did not tell us anything on what to do or where we walk from. The wedding planner works at the Briarhurst so i figured she could at least give us some direction on what to do, but we were left fending for ourselves. Also, we showed up 30 minutes early to start setting up and they kicked us out until the designated time. There was no one there so we were forced to wait in the parking lot for them to say we could come in and set up. The food was ok, not worth $30 a meal. And the staff took the top portion of the cake and served to our guests, we were not allowed to take the top peice home, i was very upsest about that. They made us get ready in a very small bathroom, about the size of any normal household bathroom, it was hot and very cramped. We were told to get ready in this certain bathroom, but the Briarhurst failed to tell us that is was a public restroom, So the other guests had to use our bathroom whcih had all of our personal belongings in, very embarassing knowing that stangers had to go the the restroom next to my bra!. Unbelieveable. The briarhurst stays open for dinner during the ceremony, so when I was all dressed up in my gown, they led me through the dinning room past everyone that was eating to get to the door where i was to walk from, it was very embarassing. I never dreamed that on my wedding day i would have to walk in a dinning room full of stangers and interupt their meals. So embarassing. You would think with suge a big facility they would people ither guests in an area where they wont be in the way of the wedding. The Briarhurst has read some of my reviews about this terrible day, They didnt even care I was upset, they only offered me gift certificates and offered to make me a new cake since they didnt serve it properly. What am I going to do with a 50 person cake. They also wanted me to clarify some things The 9 dollars a person is not just for the cake. Its for the cost to make the cake, cake cutting, coffee and tea, I find this funny because the coffee and tea were never offered to anyone of my guests. My parents were dying to have somthing besides water (which was never filled) Also they threw a fit about the $100.00 bar fee. Basically if you want to put any money down for some our your guests or bridal party to have drinks you have to make it worth the bartenders time by paying the $100.00 gratuity, it does not going to your bar tab, its a tip. The wedding fee goes for the whole set up and gratuity, So not only do you pay 22% (27% if you dont make your payments on time) for gratuity but you pay an extra $5 bucks per person so they can get more cash out of you. I urge you to look elsewhere for your wedding. This place will only make things harder for you, and I want your day, whoever you may be, to be better than mine. Cheers Sarah

What do you want first, the good news or the bad news? I will give the good news first. Recently I visited Briarhurst Manor for the second time. The first time was for a group event, and the most recent was to use a coupon I bought online. Both times I was impressed with the food, service, and atmosphere. The Estate is beautiful, the food is delicious, and the service was prompt and friendly. Now for the bad news. While the food, service, and atmosphere are excellent, I think you can spend your money better elsewhere. Even with a coupon, I left the dinner table thinking I could have spent my money better. Briarhurst Manor does not have a monopoly on great food, service, and atmosphere, and you would be wise to take your money to another place in town. Finally, about halfway through my meal I had a BUG, more specifically an elder bug (feel free to search Google images if you need help visualizing), jump on the table. This was not only surprising, but disgusting. I am shocked that a place as nice as Briarhurst cannot even get the most fundamental part of food service correct. If you are still thinking about going, and sharing your food with an elder bug, just remember that it is not the bugs that you see that should concern you, it is the bugs that you dont see that should keep you guessing. I feel it is important to follow up on my post above (written prior to the response of the verified owner of Briarhurst below)...The staff at Briarhurst Manor was aware of the bug on our table. Immediately after I killed the elder bug that jumped on our table, our server came to our table, cleaned the bug off the table, replaced my napkin, and proceeded to explain that Briarhurst has an elder bug problem which they cannot fix because they cannot cut down the trees at the historic manor. This was the first time the Briarhurst staff was aware of the bug joining us for a meal. I also left a comment card at the end of the meal describing the bug problem during my meal; the second time the Briarhurst staff was made aware of the bug problem. One week ago I responded to the verified owner of the Briarhurst via the email he/she left in the response posting, still there has been no response. The bottom line is the Briarhurst staff was aware of the bug, and chose not to fix or address the issue and simply chose to ignore it. I honestly question their desire to correct issues that arise, and dont think they intend to rectify wrongs. In response to critiques the verified owner of Briarhurst offers references to other happy customers that enjoyed their Briarhurst Manor experience; great. Most people would enjoy their time at Briarhurst. It is a nice place and the food is great; just hope that you are not one of the few that has an unforeseen issue/bug arise, that goes unaddressed by the Briarhurst staff.

Having never attended a dinner/theater presentation before I will confess some initial confusion about what was going on. The ad we responded to read Murder on The Plains (The story of Tom Horn) which caught my eye because I am familiar with the Tom Horn story. When we arrived for our show the presentation was something else entirely and I am unable to give you the name of the silly story depicted. When we were arrived we were seated in a lovely antique glass bench window seat which under ordinary circumstances would have been an intimate and lush setting. Unfortunately we were seated closely next to another party who resisted introductions and refused to discuss the impending melodrama we were all to witness. The drinks we ordered took a while to arrive and the main entree was tasty but cold. I think our neighbors had the same problem but I only know this because I heard them discussing it among themselves. I honestly thought the tickets we bought on line covered the dinner also but that was not the case. Be prepared for a little sticker shock on the dinner price. The night we were there the young wait staff spilled at least one entree on the stone floor. The covered plate scooted across the room like a hockey puck. Another waiter spilled hot coffee down the back of a lady in the Conservatory. The actors wander the establishment before and after the meal and do a good job of introducing themselves but a poor job of introducing their story. After dinner desert is served in the Conservatory and guests are seated with others guests at common tables. Here communication was also limited to parties attending together or to parties only dressed as fancy or as casual as their neighbor. The Conservatory is an obvious 21st Century add on to the main house and has none of the Gothic charm of the main house. Guest are welcome to wander the house and see those areas not locked or roped off from public view. Lighting in the Manor is dark and dim and is badly in need of a 21st Century upgrade. Under most circumstances this dim lighting would be romantic but the mood is kind of destroyed when you are forced into close proximity to other people who dont care to talk or visit. The murder/mystery was concluded there in the Conservatory and it went off like a moderately funny comedy act. Final interviews with the actors in character was a tense experience and could be met with some hostility from the tiring actors. From the time we were seated (5:00 PM) and until the time the show was over we had spent over four hours in the establishment being forced into interaction with fellow citizens also in attendance. By the time the show was over we were ready to leave. BTW, the Governor did it. 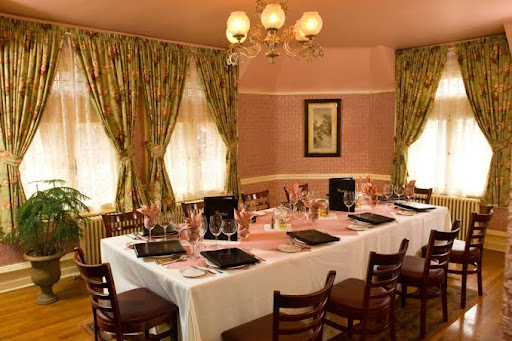 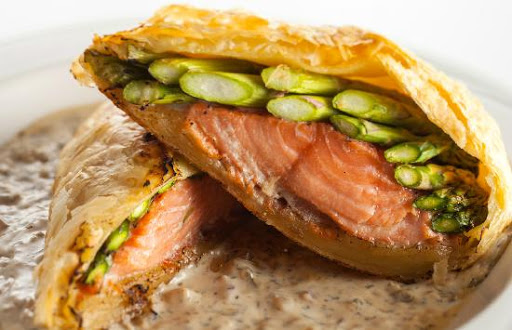 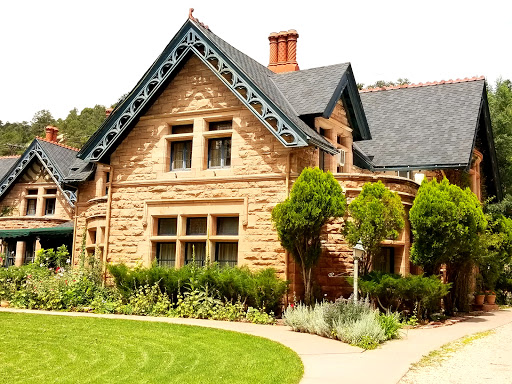 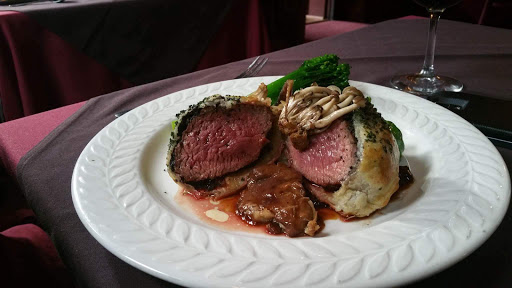 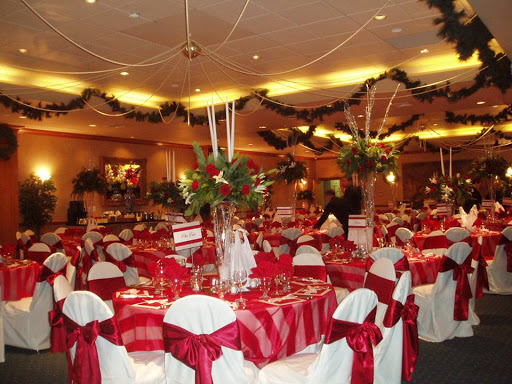 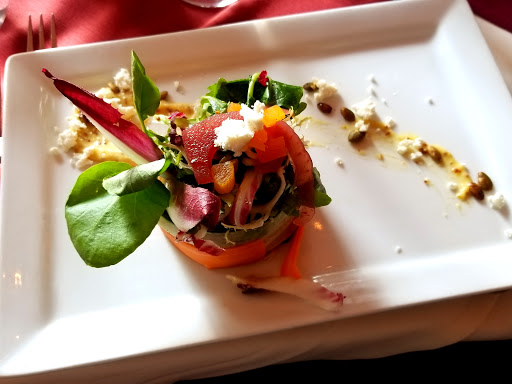 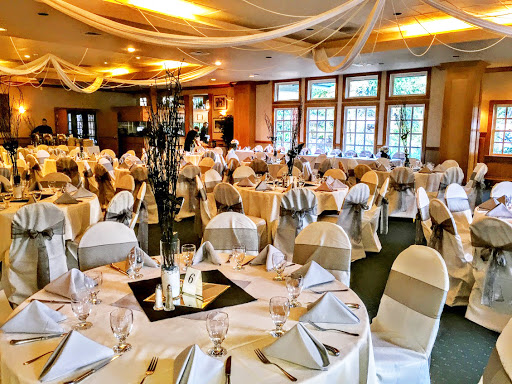 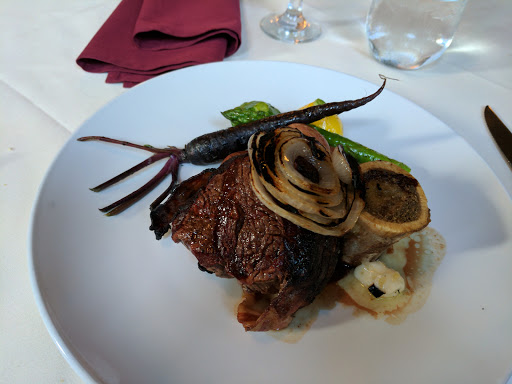 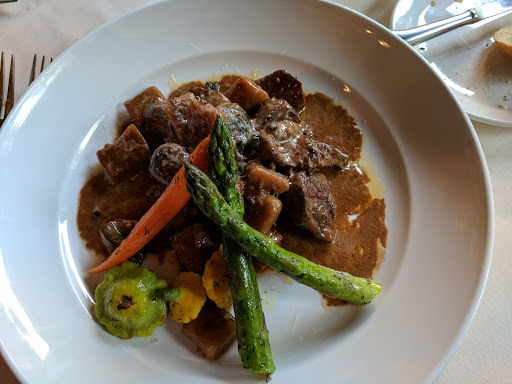 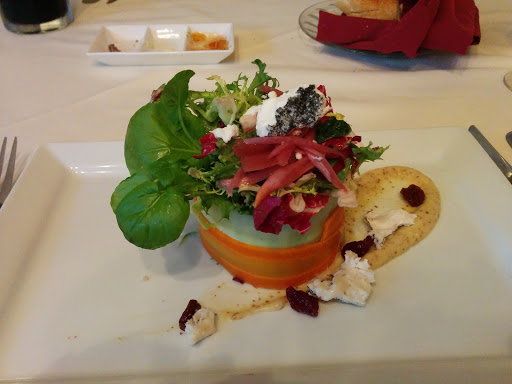 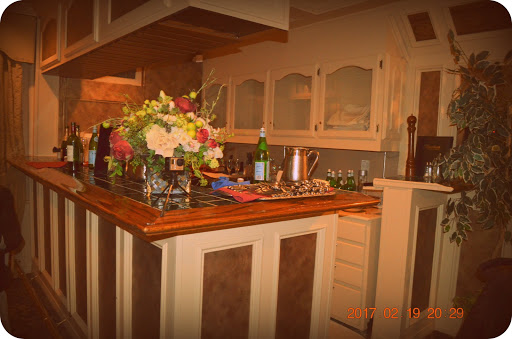 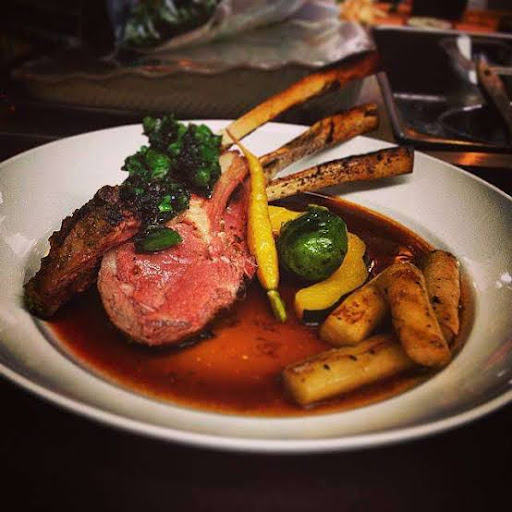 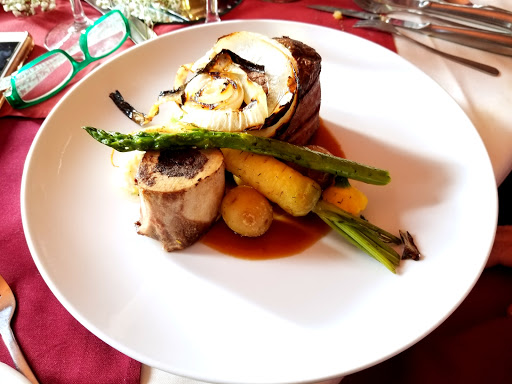 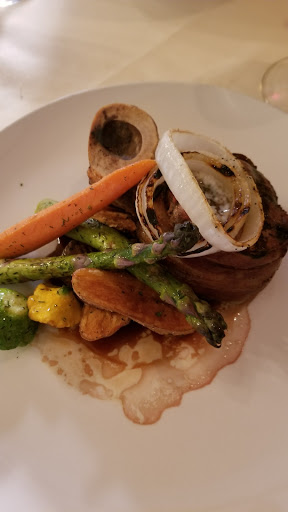 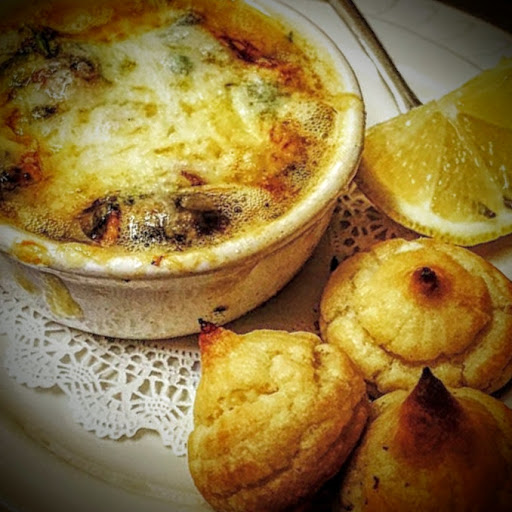 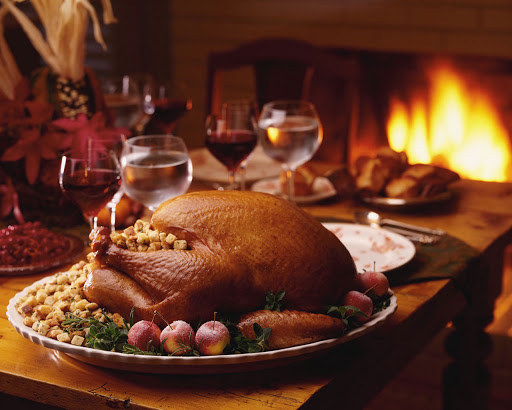 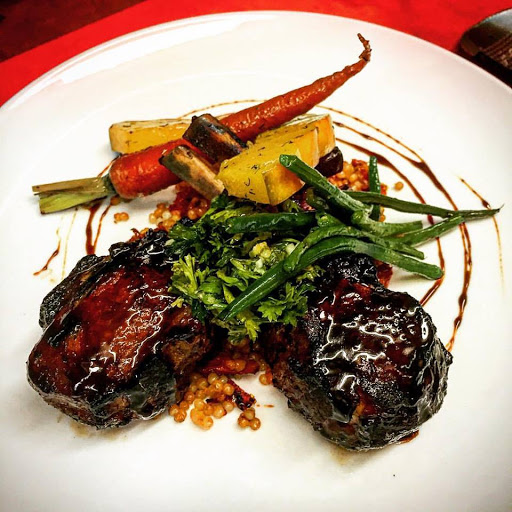 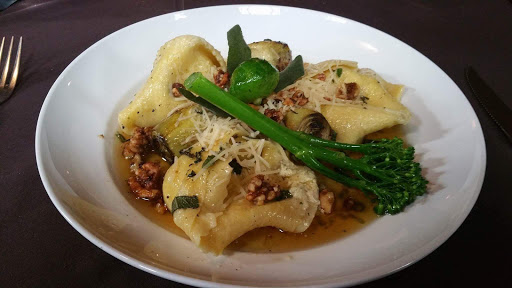 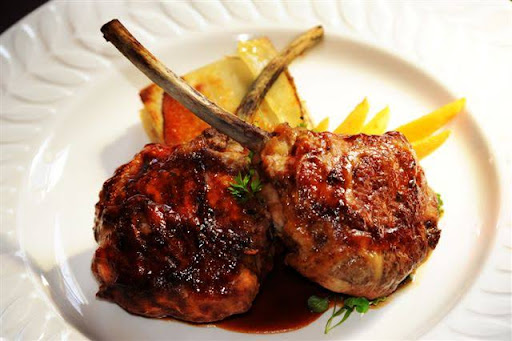 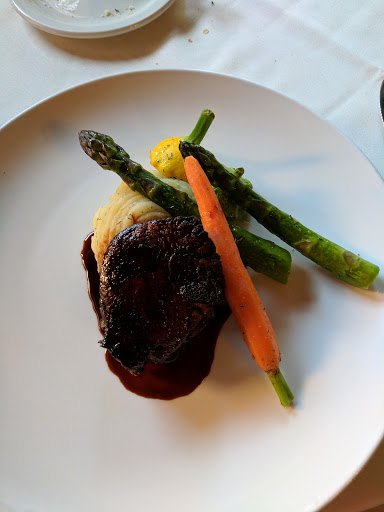