We decided to take my sisters out yesterday for their birthday here and everything was packed. Mind you letting it be a busy Friday and its the weekend before Christmas. Got sat at a nice table and played around while waiting on our server. When we finally all got to our table to figure out what we are going to eat, our server showed up. He asked for drinks and what we going to eat. We took a vote and decided BBQ pizza. He didnt know HOW MANY SLICES CAME IN A PIZZA NOR THE UP-CHARGE FOR BACON. Then he took our orders and was about to leave when I noticed there was wings on the menu. I asked about other apps and was debating about the wings or the quesadilla. I was about to decide when he rushed me because he got sat a 2 top and said I have to go. I took more time and placed my order for the quesadilla. After that, we enjoyed bowling and the games, but got our food sometime later. We got our food and was enjoying it till I noticed that MY SISTERS WERE EATING OFF A NAPKINS. Never again. We decided to play eye spy and try to find our server because he just seems to disappear every-time. Flagged down an employee and asked for plates for our table. Our server came out minutes later with the plates. Everything was good till we ordered a funnel cake and got it with some weird pink sauce. It was mixed with something and it was horrible. We told our server and he apologized for it being the wrong source and that it was old sauce. We split the checks for 2 people and it came to 17.28 for 2 people. We used our cards, but noticed he rung up my card TWICE. I took my sisters card and told him the problem. He then asked me with card wasnt rung up and I told him my sisters card which was one. He then decided to get smart and raise his voice after asking me again for which card wasnt rung up. I showed him the card AGAIN and said this one. He took the card from me and left to give us our checks after the mess-up and left. I will never be here again with my family. This is the worst place to go and get treated like crap. I worked at restaurants and this is just crap. You as a server should know the menu and everything without looking at it or at least how many slices come in our PIZZA. 2nd time here? Shame on me for coming here thinking the service was good after hearing all about it. Never again. Be Blessed.

I went with some friends on Easter to get a quick dinner. The restaurant was very modern and had a great design, and the hostess sat us immediately. Our waitress was very nice. I was very excited about the menu; it offered great options with pastas, pizzas, seafood, wings, and appetizers. I ordered the Frutti di Mare. I had asked the waitress if I could exchange the fettuccine for different pasta, but she refused saying that that was the pasta that came with it. I dont see why that would/should have been an issue. Although she refused to change the pasta she did offer me two different options for sauces, red or white. I chose white. Our ticket time was 25 minutes, which is too long considering we were 1 of 2 tables. My food came and I was immediately displeased. I was given my entrée with red sauce instead of white. My scallops were small, rubbery, and terribly under seasoned. The red sauce was also watery. The pasta tasted very processed and seemed overcooked, and my clams, although large in size, had an odd taste to them. The shrimp were just OK. I also ordered fries. My waitress had forgotten to bring them out with my entrée. She brought them out without me having to remind her but when they did come they were soggy and under seasoned. After our food was brought to the table our waitress never checked on the table again, and at the end of the meal, we were never offered desserts and she immediately brought the checks. I was disappointed because the table next to us ordered desserts and they looked great! From the sound of it they had a large dessert menu. I also thought it was odd that even though she brought us waters, she never asked if we wanted anything else to drink. If she had, I would have purchased a beverage (Her loss)! My check came to $21.60 not including tip. This restaurant is in a University community and as a student I can’t usually pay so much for a meal. I don’t mind spending that much if it’s worth it, but in this case it was certainly a disappointment. The bowling may be fun, but I don’t recommend eating here!

While visiting downtown Cleveland, some friends and I stopped into this bar for a drink on the patio. The host informed us that they weren’t seating the patio but that we were welcome to sit inside. Their happy hour specials were pretty good, so we decided to have a drink and get a bite to eat before hitting some of the other bars. Our server arrived and took our drink order. They took forever and when they did finally arrive, only one was correct. I ordered an extra dirty martini with extra olives and was served a glass of vodka with one olive. Our server did finally remember to bring some extra olives but never remembered any olive juice, as requested. She never remembered non-alcoholic refills or waters that anyone requested. Our food was delivered with no condiments and neither our server, nor the server that delivered our food ever brought them after being asked several times. I finally got the attention of a manager -- my wedge was awful (small serving, bitter lettuce, drowned in tasteless dressing), everyone’s fries glistened with grease, no one had a drink, and no one had condiments they had asked for. I was starving so I ordered another meal. Hot wings. Fast, easy, I was seeing lots of orders go out, so I assumed I would get them pretty quickly. I waited almost 20 minutes and finally gave up. I flagged the manager down and told him to forget the wings. He got defensive, noted that they were busy and if I wanted them, I was more than welcome to wait and take them to go. I pointed out that all I had done was wait, for food, for drinks, etc. and that I just wanted to go. Our server finally brought our checks and we paid and left. I got nothing but excuses, bad service and awful food at this place.

I was at The Corner Alley tonight for dinner around 6:30pm. The bar area is super upbeat, fun chalkboards are all around with specials and weekday/night events. They have the coolest bowling ball wall divider separating the bar/restaurant area from the arcade and alley side. It was pretty busy for a Sunday night, but we were sat right away. We arrived during their change over and both waitresss we had were polite and upbeat. The hostess (I am so sorry I forgot your name!) a brunette haired girl went ABOVE and BEYOND to locate crayons for my 6 year old (they had run out) which she absolutely didnt have to do- so thank you! We chose to sit on the outdoor patio facing Euclid Ave. They have another outdoor patio that faces 4th street as well. Our waitress, Sunny, was quick with drinks and our order. She was very friendly with us, even while working a very large party. The food was okay for the price. Good, but nothing memorable- though in my defense, I had their grilled cheese and french fries which isnt exactly a "specialty" item. I gave it 3 stars because while the food was good, its definitely not some place that stood out to me. It was horrible, it wasnt mind-blowing. It was delightfully in the middle. All in all I think place would be an awesome lunch verse dinner spot. I could definitely see it being a lot of fun with a group of friends! Give it a try! 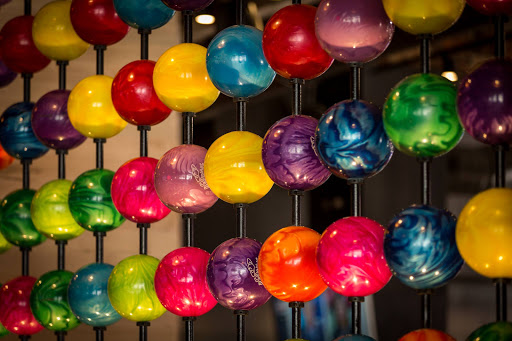 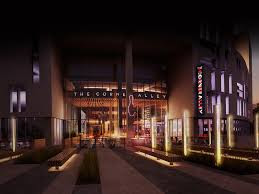 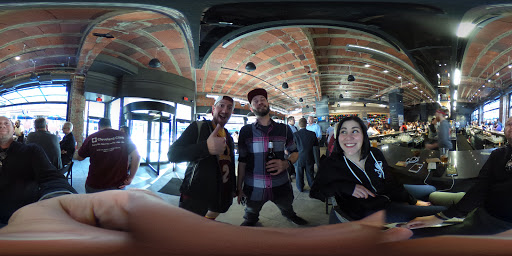 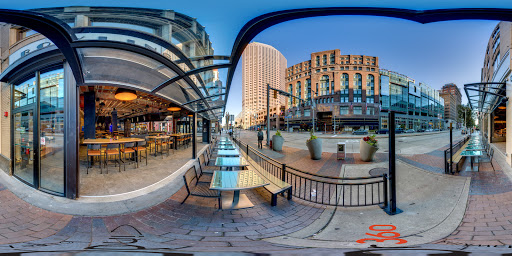 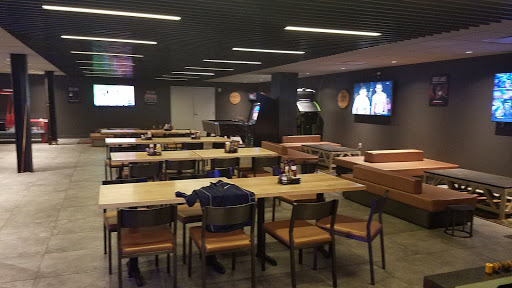 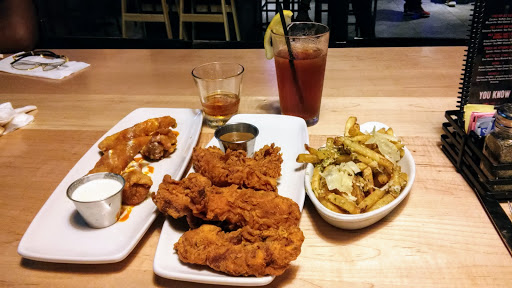 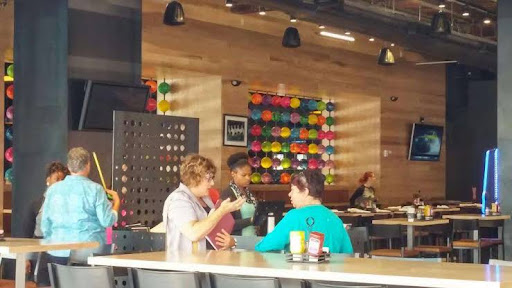 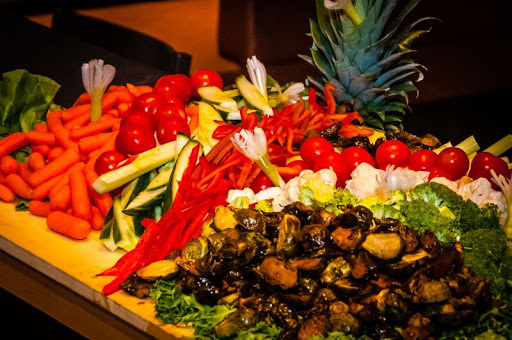 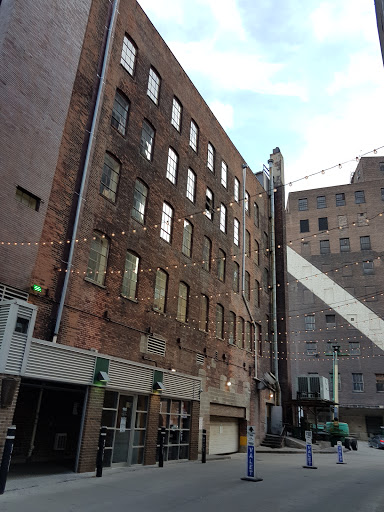 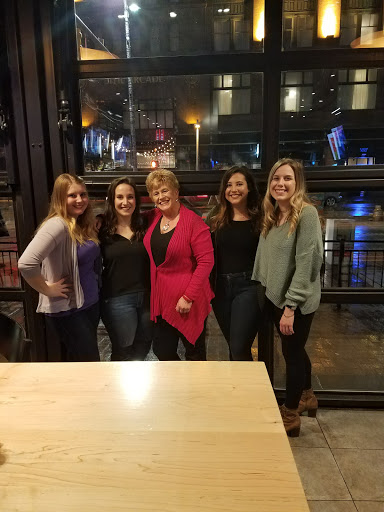 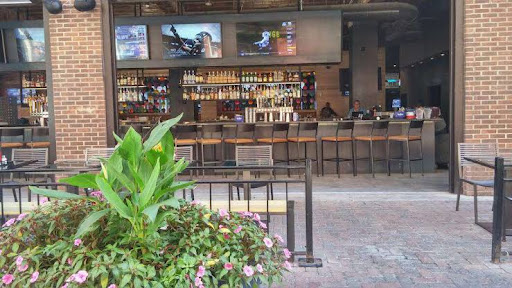 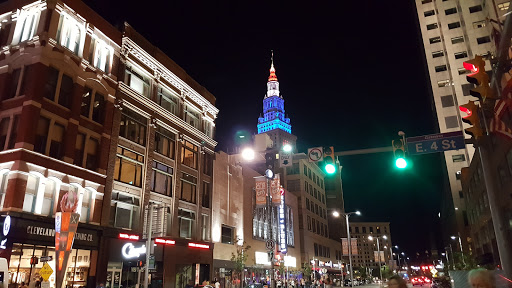 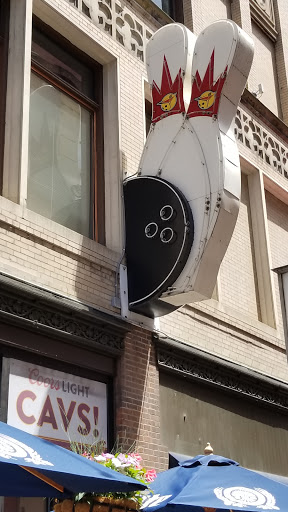 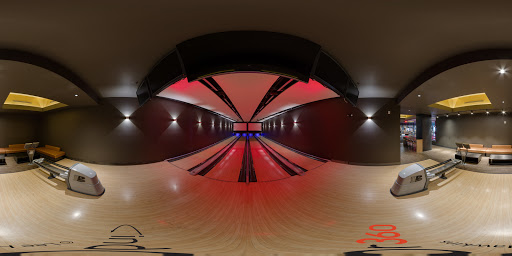 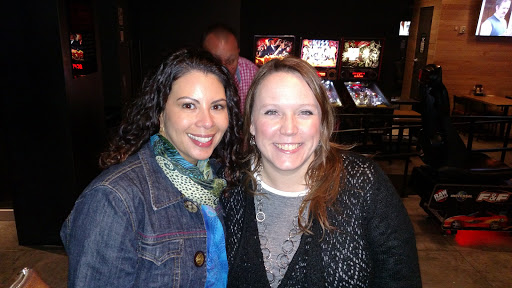 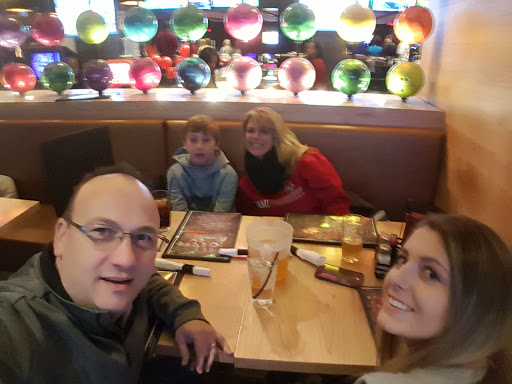