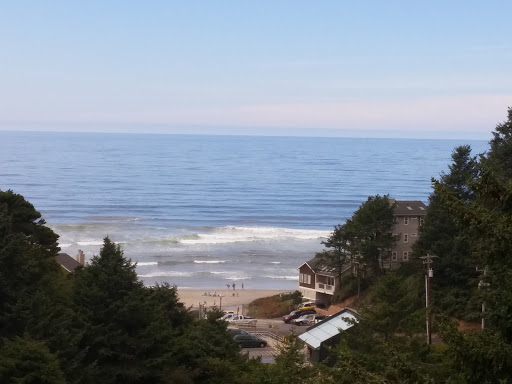 We stayed at the Salishan on a last minute trip to the Oregon Coast. Their website was very good and they seemed to have a good deal for 2 nights including 2 one hour spa services, which met our needs. The website led me to believe that the hotel was much newer and more modern than it was. When we arrived we were assigned our room, close to the main building, and overlooking the putting course. There was a family below us who were out on their deck, and the children were belting Frozen songs until 9pm every night. This wouldnt be a problem if it wasnt for the fact that the room didnt have air conditioning. It was hot out (in July), and we slept with the doors open - but it was still less than comfortable. Add the singing children in, and it wasnt as great as Id hoped. The room itself was charming - had a log cabin type feel. The shower curtain was too short - so the bathroom floor was drenched after taking a shower - which was annoying. When we arrived we asked for advice on where to eat and of course they recommended the dining hall. However, we werent in the mood for $40 steaks, so we headed out to try and catch the sunset. Everything in the area we could find was closed, so we came back and ate upstairs in the lounge. After we found some seats it was bout 5 minutes before we were addressed. We asked for some menus, and 10 minutes passed while waiting. Finally I got up and retrieved them myself. Service was incredibly slow, though my sliders and creme brûlée were enjoyable. On our second day we had appointments at the spa. The spa is run independently for the most part and we were incredibly impressed. From intake, to the tour, to the outdoor salt water spa overlooking the water, it was all perfect. This was not just going for a massage, but an entire spa experience - the most enjoyable one Ive ever had. So I would recommend not rushing. We ate breakfast one morning in the sunroom - not only was this expensive, but the service was incredibly slow. However, it was convenient. In hind sight we would arrange to eat elsewhere. We didnt have time to use many of the amenities. We thought about going for a swim and walked by the pool, but there were SO many kids in there and it was super loud. Not what we wanted at 8pm at night. We were surprised at how many families were staying on the property. The Spa and Golf course marketing on their website led me to believe it was more adult oriented. I was wrong. When we checked out to pay the bill, the spa hadnt been credited properly. Not only did they charge for one of the massages that was in the package, but the front desk charged me 4x the amount I had written down for a tip. They had already charged my card without checking these details and it took 15 minutes for them to figure out how to reverse their mistakes. One last thing - I booked a trip to the Oregon Coast to be connected to the ocean - and this is not on the ocean. There is no beach and no place to watch the sunset over the water. In the future I would have paid a little more for a hotel with more beach access. Didnt really feel like this was worth the money we paid (the spa was, but not so much with the hotel).

Disappointing overall. We stayed at the Salishan a Friday night, May 20th. I called a day before to confirm my reservation and to inform that we will have a dog , and an infant baby with us. The receptionist said that would be an extra $35 pet fee , and she said there will be a crib made up in the room for the baby. When we arrived there was no crib. When we were checking in i was asking the receptionist where we could have a dinner at, and i said we will have a 5 months old with us, she mentioned the bar on the second floor, along with the other places. When we went to that bar and took a table, a bartender came to us and told that babies are not allowed. Totally understandable, and thats why i asked the receptionist earlier. By the way, that bartender could be more accommodating and suggest we could go dine downstairs, he did not. (Keep business in the property!) We went to Sun Room downstairs. the service was PAINFULLY SLOW. We got there at 7.10 pm, it took 20-25 minutes just to get an appetizer, and 1 hour 10 minutes to get our dinner!!! After we finished with the appetizer my husband asked for a beer, it took another at least 15 minutes to bring him a Budweiser! When the dinner was finally served (more than an hour later), our baby woke up and started getting fussy, so we couldnt finish eating and asked to get our food in a box. After 10 minutes of waiting we saw our waitress starting taking an order at the table next to us, and saying "Good bye"to us...my husband lost all his patience, and we left without our food boxes. Our waitress saw us leaving, didnt even say anything. She never apologized for our order taking so long, it was very frustrating. We left hungry, paid full price. Next day i was checking out, the receptionist asked about the dinner, and i said that the service was too slow. She looked at me, said absolutely nothing. Then she told me about the additional pet fee. I mentioned about calling a day before, looks like they took notes about the dog, but not the baby and the crib. At least she waived the resort fee, for not bringing the crib. Other hotels we stayed at where there was a high charge for pets, there was at least a water bowl provided for pets, or a dog treat. Salishan seemed not a very friendly place. Even if the property is nice, its the people who work there make the place great.

Setting/location: Spectacular, one of the most beautiful places on the Oregon coast. The layout and landscaping were really well thought out back in the day. In that sense, its world-class. The styling is from the 60s when it was built, but its sophisticated, and things seem well kept for the most part. The service was good in all cases. Amenities are good, including the pool, hot tub, fitness center, tennis courts, 18-hole putting course (free and really fun), and nature trail to the beach. The golf course looks like paradise. Im not a golfer, but it made me want to start. Prices: Too high. Our room went for $250/night (off-season), when it probably should be $150-175 (we paid $130 on a LivingSocial deal w/$20 meal credit). Browsing through the spa services, I was surprised that a 60-minute massage was $125. Thats steep. And they charge $5 for Internet access. I know thats normal for more expensive places, but its still annoying. Room: Premium room was large and very clean, but upstairs guests could be heard stomping around. TV and position was poor, though cable lineup was good. Bathroom was nice, and so was the gas fireplace. The bed was excellent. Mini-fridge was also helpful. So, pretty good, but could be a bit better. Food/restaurant (Steakhouse): Very nice atmosphere and good service. However the food quality was below par for a place this nice. The mac and cheese was more like a milky soup, swimming in overcooked pasta, and showed no signs of effort. The halibut fish and chips: overcooked and too salty, but the fries were excellent; cole slaw would have been great but was too salty. Noticing a pattern? Got a replacement for the mac and cheese, some grilled asparagus with rice, and the asparagus was undercooked and too salty, and the side of rice must have been some kind of minute-rice from a box, totally unacceptable. On the plus side, the shirley temple and coastal espresso martini were both superb. Did not try the dessert, didnt want to risk it. Summary: Id have a hard time deciding whether to come back. The setting is magical. We want to love it, but the prices and food are serious problems. If we can get a deal again, I think wed come, but eat somewhere else.