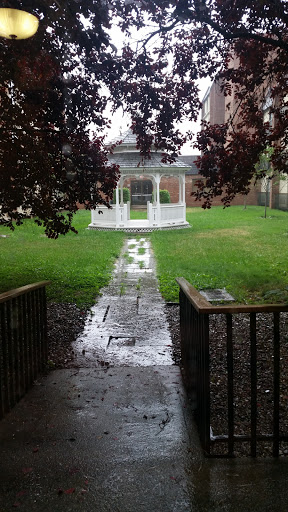 Terrible!!! First 2 nights were on the ground floor, probably dorm room, and oh my.... The bath was dirty (fail) and moldy (fail), no hot water for shower or bath, only tepid (fail)!!! The TV service was from back in the 90s never updated (fail) and room smelt very musty (fail). There is a draft on the floor from the patio door which obviously doesnt close properly so cold air and noise from outside comes right in (fail)!!! Last 2 nights, move up to the third floor, which was much cleaner than the grungy ground floor dorm room (thumbs up). yet... still no hot water (fail again), this time the bathroom fan didnt work (fail) finally some 21st century tv service (thumbs up). No more draft on the floor (thumbs up). Still a musty smell (fail). No luggage rack in the room, had to ask the front desk (which I will get to shortly) (fail). Ceiling is cracking to the point where the paint and drywall may start to rain down on someones head. Now for the Hotel as a whole... a big FAIL!!! The whole place smells musty and is dirty. Front desk personnel werent very friendly at all.. Customer service sucked... They DO have a pool.. When THEY feel like unlocking the doors!!! Even though the times are posted on a sign on the door of the pool, still couldnt get the front desk to let us in... First night was the "lifeguard" was running an hour late, 2nd time the "lifeguard" was eating lunch... so the pool was closed!!! LOL The so called "lifeguards" arent guarding lives very well... My 6yr old was doing a better job then him... He was constantly on his phone, cause Facebook is waaayyyy more interesting!! I have never been to a hotel that requires a lifeguard for the pool, second, if youre gonna have a lifeguard then can you make sure they are competent and off of Facebook so that if there is an emergency, cause this is why you have a lifeguard to begin with, that he is alert and ready to jump to action... a Lifeguard the last I checked, did not wear street clothes with running shoes in the pool area... (major fail) And please, can you move the stupid ashtrays away from the doors, so that when the guests walk in , they are not hit in the nose with the stench of old cigarettes butts, and a cloud of nasty 2nd hand smoke...(fail) All this said, very disappointed and will never return to this property, and cannot recommend this place to anyone... no one...

Hotel was very nice. When we got to the hotel, we were told that our reservation was cancelled. Apparently they booked us for the wrong date, and when we didnt show up a day earlier than the date we intended to book, the reservation got cancelled. After being given a room with two full size beds and no refrigerator, which was all that was left after we reserved the king size bed and refrigerator, we went to the room, and the TV had no picture. We called the front desk and they called maintenance and they got the TV fixed. Later that night, around midnight, a couple entered our room while my wife, one year old child, and I were sleeping. I was started and yelled something at them because I was shocked at someone entering our room. Apparently, the front desk person never checked us in, and they gave our room to someone else while we were in it. I called down to the front desk immediately afterwards to complain, and I was put on hold. I hung up, as I didnt wish to stay on hold in the middle of the night, I just wanted them to know that they screwed up. The next morning, after we ate breakfast, out keycards did not work, and we couldnt get into the room. We had to go all the way back to the lobby (which was not close) with an angry toddler, and get our keys reactivated. Apparently, they deactivated our keys when I called down to the front desk to complain about the intruders in the middle of the night. We got our key cards "fixed" and went back upstairs. When we got back up to the room, only one of the cards was working, so we had to go back to the front desk to get the other one fixed. The hotel is physically beautiful, and has an indoor pool as well as an outdoor pool. It is highly unlikely that anyone will have as poor an experience as ours. The hotel is likely a three star hotel. Based on our experience, I had to give it one star. If I could give it zero stars I would. They did apologize for the inconveniences, but did not make much of an attempt to make it right.

Attended a wedding here and they did an excellent job on the wedding. But the hotel rooms that we rented were absolutely atrocious and we actually downgraded from two adjoining rooms to one room because the smell was so overpoweringly bad in both that we couldnt fathom paying for more then one smelly room. I actually had to get towels from room service and put them down all over the floor to even remotely feel comfortable with my small baby in the room. they really need to fully remodel any rooms that they put people in. Normally Im not a big complainer but when I say it smelled, it smelled like if you stuffed your face in your dirtiest shoe. The front of the mini fridge looked like somebody had taken a putting green to them. And the bathroom was not cleaned sufficiently, so somebody elses hairs were stuck to the toilet when we arrived. Even the room that the bride got ready and had light bulb so were out and broken glass on the floor. Though I did see some other peoples hotel rooms and they were better than ours so if you get stuck with a bad one you could always ask to be switched. So sad because RIT itself is such a great entity in Rochester New York

I was put here for overflow housing and was blatantly told that if you are put here, RIT is expecting to keep you there all semester, so dont expect to leave. Youre better off getting off-campus housing if you have a car. If you have no other choice, dont stop hounding them about on-campus housing or youll never get it. The following is a list of pros and cons: Pros: Ethernet is fast TV was nice and had HDMI ports Each room has its own bathroom Did not have to cook own food Cons: COULDNT cook own food because two microwaves in total exist on the 4th floor A/C unit sounded like a jet taking off A/C unit had two settings: ice box and off Windows existed, but the glass was so old and smudgy almost no natural light could permeate them No fan in the bathroom Darkness Walls were thin Few wall plugs Smelled funny Somehow worse than the dorms Very far from campus Costs too much to put up with all these cons Additionally, I never got a meal plan because I moved out after 5 days, but I am told theres almost no difference in food quality between the two restaurants.

Overly expensive for what you get, granted the only thing i liked about the this Inn is that the bed is comfortable. Look: not visually pleasing, somewhat clean, some windows has nice views, other looks over the highway/parking lot. amenities: AC are hit and miss in some room, but you should bring an air freshener to set on top of the ac/heating unit as the floor does not smell pleasant, it ranges from a men locker room to a womens bathroom disposal. Windows are blocked from opening fully and only open 3 inches if you are lucky (rivets hold the system together so bringing a screwdriver will not help) Fitness room room is outdated, and machines has damages. pool are overly chlorinated and cloudy Staff are friendly in my experiences. onsite restaurant is a disgrace, food is always lacking in something. they offer specials, and specials they are not if they want to charge $12 for a simple meal. everything is incredulously expensive in the cafe. 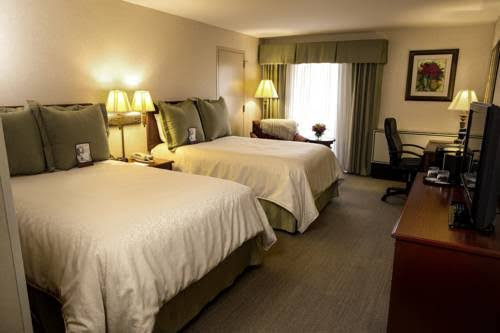 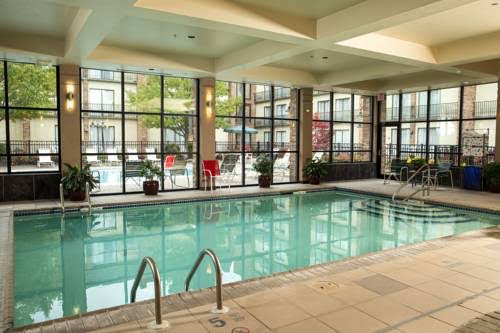 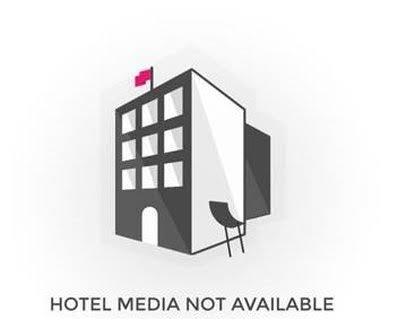 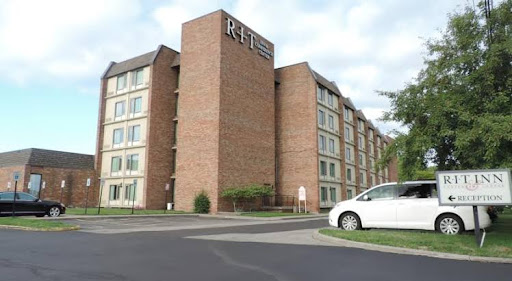 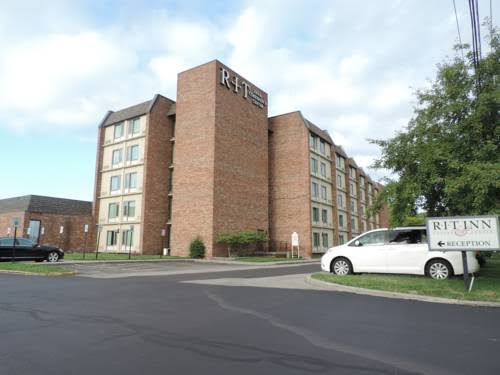 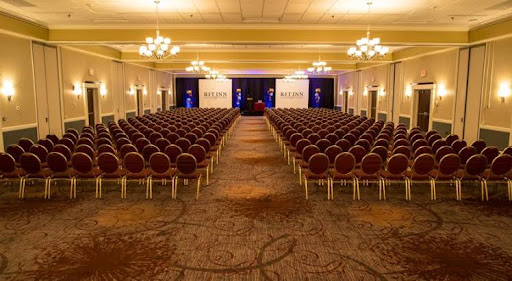 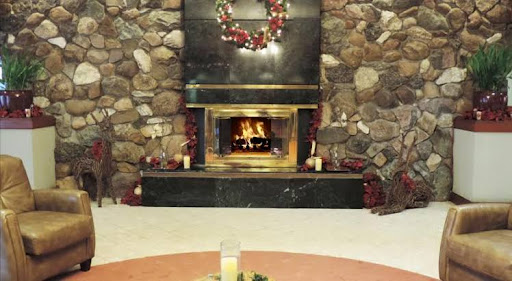 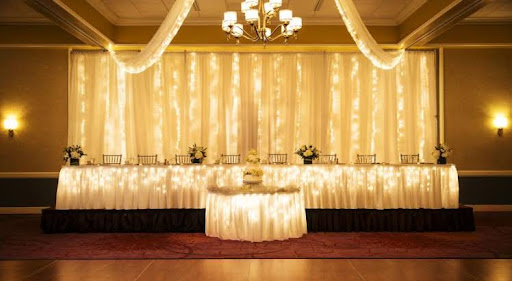 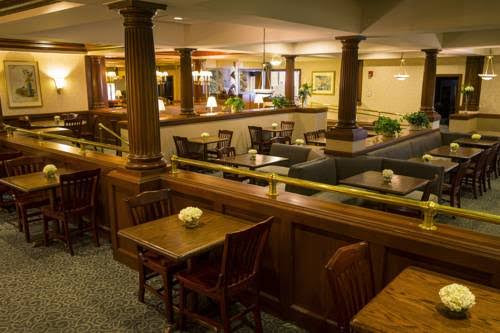 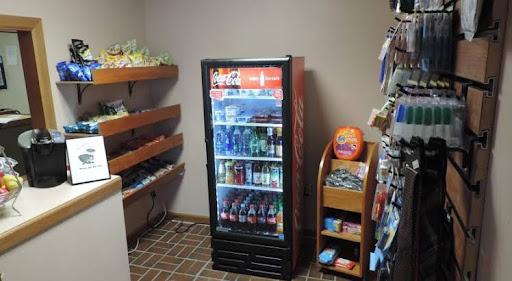 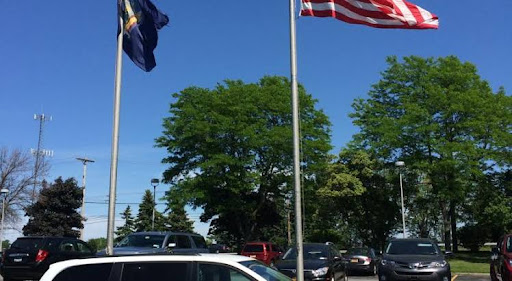 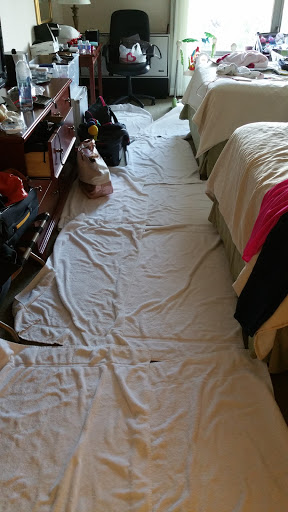