Do not go to Paragon Theater and/or Neo Restaurant Not being able to spend a lot of time with my kids because of my work, I bought tickets to see the new Moana movie. The wife and I hadn’t had dinner so we went to Neo to order some takeout beforehand. It was 6:57 pm when we ordered. Peter took our order which consisted of two chicken strip dinners and drinks (the Mrs. and I like to eat fancy). He asked us if we would like a buzzer and I said no, I would wait while the wife and kids go find their seats. Exactly 20 minutes later, I walked up to the host and asked the status of the food. Someone went back to check and came back to state that our order had not even been placed. How fitting that our server’s name was Peter as I realized then the depth of his betrayal of me. Now, the movie had already started by then, so I was a little upset about it. As someone who has worked in fast food for 6 years, I try not to complain, but I wanted to say something to the manager. They went and got him and he had a most majestic beard, the kind where he likely has to often tell ladies, “Excuse me but my eyes are up here.” I explained to him what happened and he then asked, “What do you want me to do about it?” Seeing as there were no trees around with which to employ his probably fierce lumberjacking skills, I said nothing, and decided to try my luck at the actual Paragon Theater concessions. At that time, it was about 10 minutes or so into the movie as the previews were done. I went and ordered two chicken strip baskets (it was a classy joint so they had chicken strips), popcorn for the kids, and a Dr. Pepper. Cody helped me out and gave me my popcorn and Dr. Pepper and told me to wait at the end of the counter for my chicken strips. So I did. And I waited. And I waited. About 7 or so minutes later, when another guy walked up and they handed him two chicken strips baskets, the concern on my face was showing. One of the others behind the counter asked me what I was waiting on. I said, “two baskets of chicken strips.” She looked to the guy who was working the chicken oven contraption and he looked confused. I said, “I ordered it from Cody” and pointed my finger towards the other side where he was, pointing as if in a lineup of suspects determining who committed this most foulest of crimes. The chicken oven guy again asked me, “What’d you have?” My immediate thought was, “Did Peter tell you to do this?” I calmly said, “Two chicken strip baskets” and pulled out my receipt to show him as my eye started to twitch. He went in the back and pulled out some more chicken strips from what appeared to be a fridge and plopped them into the oven. Five minutes later, I walked into the movie with those tender golden morsels of meat. The movie time was 7 pm and it was around 7:45 when I walked into the theater. By the end of it, I had spent around 80 dollars to be transported to a Mad Max-type environment where it was a fight to the death to get some freakin chicken strips.... And I won. But I will not be coming back, not even to see that manager’s glorious beard again.

Very nice atmosphere, seats are comfortable and recline, and the ticket prices are rather good. However, my main reason for wanting to review is the excellent care given to me by one of the managers on shift. I was with my family enjoying my movie, when a person a couple of seats down decided to browse on her phone in the middle of the movie. After nearly 10 minutes of the bright phone screen distracting me and the other patrons, I politely asked her if she could put her phone away because it was distracting. Instead of acting like a respectful human being, she instead started to yell at me and caused a further distraction. After yelling at me and accusing me of being rude for asking her to put her phone away, she left in a huff. She returned after a few minutes and went on a somewhat quieter tirade against me, where she started to threaten me and made her intentions clear that she wanted to physically attack me when the movie was over and we all stepped out of the theatre. After hearing this threat of my physical well-being, I grew concerned. Not only for myself, but also my family who was being quiet the whole time and watching the movie with me. I left the theatre room to speak to the manager and possibly see if the police needed to be involved because I did not want a confrontation, especially a potentially physical one where she made her intentions clear to do so. Unfortunately, she and her significant other left while I was speaking to the manager about the situation. However, the manager was comforting and very professional about the situation when I expressed my concerns to him. I am very impressed. Although my experience was soured due to the rude person, I will continue to visit this location solely due to the nice manager. I wish I could recommend a raise to him! Thank you, so much.

After experiencing Paragon, I simply dont go to other theaters. The reclining seats are extremely comfortable, and you can bring in a beer from their on-site restaurants. I love their discount Tuesdays, but it is disappointing that after 22 years of military marriage, when I go to Paragon with my wife Im only allowed to buy one ticket with my military discount, so I have to pay full price for her. They also dont have any way to purchase discounted tickets online unless youre a senior citizen. 24 July 2017 edit: Paragon has sold this theater to Cinemark as of the end of June 2017. I have submitted the change to Google multiple times between early July and late August, but as of 27 August it hasnt been changed. I can only assume accuracy isnt a huge concern for Google. The only other thing I would add is that as more people find out about Discount Tuesday there has been a significant increase in the number of people flagrantly using their cell phones and talking loudly during the movie, but this may be a problem with society in general rather than this specific theater. Either way, Id still be happy if the theater showed some interest in curtailing the interruptions; after all, they dont mind interrupting the movie to see if anyone is filming surreptitiously, so why cant they remove discourteous people while theyre walking through with their flashlights?

I have been here twice before. The first time we ordered our food and went inside. Most seats were taken so the guy said we could take the first row, i think they were handicapped seats. Only thing is he told us they had trays. They did not so we watched the movie while balancing our food on our laps. It was really good until I dropped my burger in my lap. Went back last week to see 10 cloverfield lane. Ordered my food. For into the movie that just started. Mainly because the woman bartender wouldnt look at me long enough to pass me my food. I had already paid for it. She took someones drink order. I waited then she gave them their drinks and asked someone else what they wanted and I was there before them. I then went to other side of bar and the guy got my food. Got in my seat, which had a tray and was super comfy. Opened up my berry and chicken salad and it had no chicken. Without the chicken its just overpriced lettuce. I wasnt going to miss more of the movie so I chose not to eat it even though I was starving. Took it up to bar afterwards. The guy said sorry. He had manager come over to help with refund but she said nothing to me at all. No Im sorry, can I make you another one, not anything. I could have went to Regal or AMC if I didnt want to eat while I watched the movie. At least in know AMC has awesome popcorn. 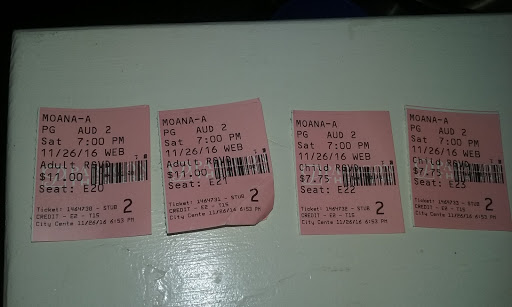 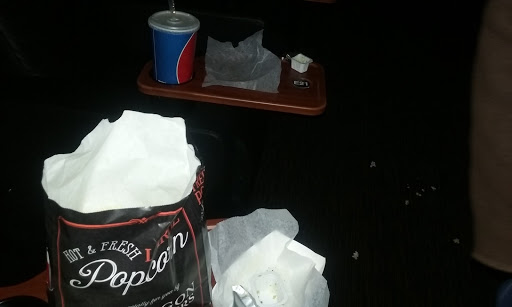